Coating could reduce the flammability of polyurethane foam 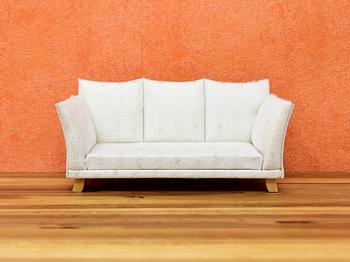 Successful development and implementation of the coating could provide better fire protection to materials including upholstered furniture, textiles and insulation.

"These coatings offer the opportunity to reduce the flammability of the polyurethane foam used in a variety of furniture throughout most people's homes," Grunlan noted.

The project is a result of an ongoing collaboration between Grunlan and a group of researchers at KTH Royal Institute of Technology in Stockholm, Sweden, led by Lars Wagberg. The group, which specializes in utilizing nanocellulose, provided Grunlan with the ingredients he needed to complement his water-based coating procedure.

In nature, both the cellulose - a component of wood and various sea creatures - and clay - a component in soil and rock formations - act as mechanical reinforcements for the structures in which they are found.

"The uniqueness in this current study lies in the use of two naturally occurring nanomaterials, clay nanoplatelets and cellulose nanofibrils," Grunlan said. "To the best of our knowledge, these ingredients have never been used to make a heat shielding or flame-retardant coating as a multilayer thin film deposited from water."

Among the benefits gained from using this method include the coating's ability to create an excellent oxygen barrier to plastic films - commonly used for food packaging - and better fire protection at a lower cost than other, more toxic ingredients traditionally used flame-retardant treatments.

To test the coatings, Grunlan and his colleagues applied the flexible polyurethane foam - often used in furniture cushions - and exposed it to fire using a butane torch to determine the level of protection the compounds provided.

While uncoated polyurethane foam immediately melts when exposed to flame, the foam treated with the researchers' coating prevented the fire from damaging any further than surface level, leaving the foam underneath undamaged.

"The nanobrick wall structure of the coating reduces the temperature experienced by the underlying foam, which delays combustion," Grunlan said. "This coating also serves to promote insulating char formation and reduces the release of fumes that feed a fire."

With the research completed, Grunlan said the next step for the overall flame-retardant project is to transition the methods into industry for implementation and further development.