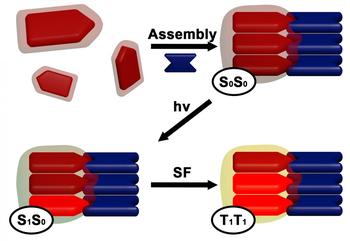 In this illustration, DPP and rylene dye molecules come together to create a self-assembled superstructure. Electrons within the structure absorb and become excited by light photons, and then couple with neighboring electrons to share energy and create additional excited electrons that can be harvested to create solar cells.

Solar rays are a plentiful, clean source of energy that is becoming increasingly important as the world works to shift away from power sources that contribute to global warming. But current methods of harvesting solar charges are expensive and inefficient--with a theoretical efficiency limit of 33 percent. New nanomaterials developed by researchers at the Advanced Science Research Center (ASRC) at The Graduate Center of The City University of New York (CUNY) could provide a pathway to more efficient and potentially affordable harvesting of solar energy.

The materials, created by scientists with the ASRC's Nanoscience Initiative, use a process called singlet fission to produce and extend the life of harvestable light-generated electrons. Early research suggests these materials could create more usable charges and increase the theoretical efficiency of solar cells up to 44 percent.

"We modified some of the molecules in commonly used industrial dyes to create self-assembling materials that facilitate a greater yield of harvestable electrons and extend the electrons' xcited-state lifetimes, giving us more time to collect them in a solar cell," said Andrew Levine, lead author of the paper and a Ph.D. student at The Graduate Center.

The self-assembly process, Levine explained, causes the dye molecules to stack in a particular way. This stacking allows dyes that have absorbed solar photons to couple and share energy with --or "excite"--neighboring dyes. The electrons in these dyes then decouple so that they can be collected as harvestable solar energy.

To develop the materials, researchers combined various versions of two frequently used industrial dyes--diketopyrrolopyrrole (DPP) and rylene. This resulted in the formation of six self-assembling superstructures, which scientists investigated using electron microscopy and advanced spectroscopy. They found that each combination had subtle differences in geometry that affected the dyes' excited states, the occurrence of singlet fission, and the yield and lifetime of harvestable electrons. Significance

"This work provides us with a library of nanomaterials that we can study for harvesting solar energy," said Professor Adam Braunschweig, lead researcher on the study and an associate professor with the ASRC Nanoscience Initiative and the Chemistry Departments at Hunter College and The Graduate Center. "Our method for combining the dyes into functional materials using self-assembly means we can carefully tune their properties and increase the efficiency of the critical light-harvesting process."

The materials' ability to self-assemble could also shorten the time for creating commercially viable solar cells, said the researchers, and prove more affordable than current fabrication methods, which rely on the time-consuming process of molecular synthesis.

The research team's next challenge is to develop a method of harvesting the solar charges created by their new nanomaterials. Currently, they are working to design a rylene molecule that can accept the electron from the DPP molecule after the singlet fission process. If successful, these materials would both initiate the singlet fission process and facilitate charge-transfer into a solar cell.