The dance of atoms 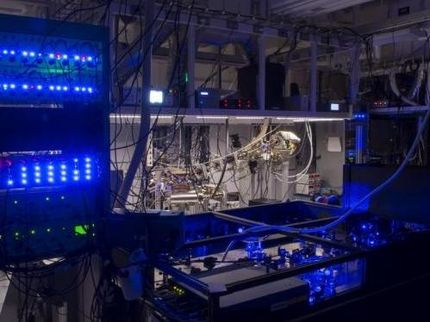 This is a specialized machine of the type used to build optical lattices from ultracold atoms.

When is a solid not a real solid? When it's a lattice of ultracold atoms held in place not by the covalent and ionic bonds that bind the atoms of "real" solids together -- like your chair or your cellular phone -- but by light waves.

"These artificial solids are roughly a hundred million times less dense than real solids," said David Weld, an assistant professor in UC Santa Barbara's Department of Physics and the principal investigator for the UC-wide California Institute for Quantum Emulation. "But they're also much easier to control, so we can adjust their parameters quickly and precisely."

By studying these optical lattice-based materials, Weld and his research team can emulate the behavior of electronic solids on ultrafast-equivalent timescales, thus probing some of the fastest processes in atomic physics using some of the slowest. Using this new approach, they aim to reveal hitherto invisible ultrafast processes in matter, in regimes beyond the limits of existing theories and experiments and, perhaps, to open the door to new non-equilibrium states of matter and new quantum technologies.

"It's very exciting," Weld said. "I'm happy to be working with the NSF because they have priorities that I share in terms of both research and broader outreach." Weld also credits UCSB's Office of Research and colleagues in the departments of Physics and of Materials Science for their support and assistance in developing the proposal. The project's research activities are integrated into science education at the high school, community college, undergraduate, graduate, and postdoctoral levels, with a focus on scientific professional development.

"It's fairly well understood how a solid behaves in equilibrium if you just let it sit there," said Weld. "What's not well understood is what happens if you take that solid and drive it really hard." By "drive" Weld means to apply a strong and time-varying force to the solid, shaking it extremely hard on extremely fast timescales. This is essentially what happens to atoms in the intense electric field of a pulsed laser.

According to Weld, a number of experiments have shown that such driving can give rise to fundamentally new behaviors, possibly including new non-equilibrium states of matter. Observing artificial solids driven far from equilibrium could give the researchers a unique window into those processes, he said. Advances in this field of research, which is still in its infancy, may enable tailored quantum control of ultrafast electron dynamics in solids, with applications ranging from petahertz information processing to attosecond imaging of charge transfer in biomolecules to new devices based on exotic non-equilibrium states of matter.

The NSF's Faculty Early Career Development (CAREER) offers the organization's most prestigious awards in support of junior faculty who exemplify the role of teacher-scholars through outstanding research, excellent education and the integration of education and research within the context of the mission of their organizations. Such activities are intended to build a firm foundation for a lifetime of leadership in integrating education and research.