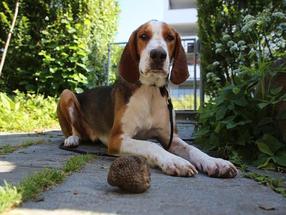 Miro, a trained truffle dog, and its harvest 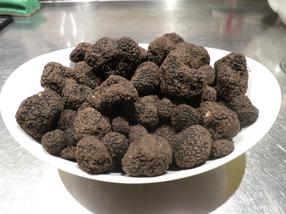 Some forest mushrooms, such as wild porcini, can accumulate dangerous levels of radioactivity from the soils they grow in. But until now it was unclear if the same was true for truffles, fungi that range among the most expensive foods in the world. Swiss and German researchers have analysed Burgundy truffles collected in central Europe and found they contain only negligible amounts of radioactive caesium, being safe for consumption.

The 1986 Chernobyl nuclear disaster in Ukraine released substantial quantities of radioactive particles, especially caesium-137 (137Cs). Transported by winds and deposited by heavy rainfall, the caesium polluted large swaths of the European continent. “Much of the continent’s topsoil layers are still radioactively contaminated,” says Ulf Büntgen, Head of the Dendroecology Group at the Swiss Federal Research Institute (WSL) and lead author of the study.

That, however, does not seem to affect the subterranean Burgundy or summer truffles (Tuber aestivum), which are highly prized as a delicacy for their hazel-nutty flavour and intense aroma. “We were very positively surprised that all specimens we analysed exhibited insignificant values of 137Cs,” says Büntgen.

This result is surprising because many types of fungi, including truffles, grow underground in – and draw nutrients from – soil prone to accumulating radioactive pollution. Deer truffles, for example, a type of ‘false’ truffles (not of the Tuber genus) more appealing to deer or wild boar than to humans, range among the most contaminated fungi. The team says that in regions where the radioactive fallout after Chernobyl was most intense, not only mushrooms but also higher components in the food chain, including game meat of red deer and wild boar, still have excess values of 137Cs.

The researchers wanted to be sure that wasn’t the case for summer truffles. “The main reason for our focus on the Burgundy truffle is the species’ wide ecological and thus geographical distribution, which allows us to compile fruit bodies over a wide range of environments. Growth of the Périgord black truffle, in contrast, is restricted to Mediterranean habitats only,” says Büntgen.

The researchers analysed 82 Burgundy truffles collected across Europe between 2010 and 2014. The samples were harvested by trained truffle dogs in several natural habitats and plantations in Switzerland, Germany, France, Italy and Hungary.

“Sampling sites were defined by the success of various truffle dogs. We were trying to get as many fruit bodies as possible from as wide an area as possible,” explains Büntgen. “The resulting pattern is by far not optimal but indeed good enough for a first assessment and interpretation.”

The researchers are unsure how their results would change if they had collected samples in areas with even higher 137Cs deposition, such as parts of Belarus or central Austria. “We really don’t know,” Büntgen acknowledges. “We will, however, continue to spatially expand our search to include truffles from regions that were so far not considered – the more the better.”

Another unsolved issue is why Burgundy truffles are far less susceptible to radioactivity contamination than other fungi. The researchers speculate a reason could be the way Tuber aestivum uptakes nutrients from the soil compared to other types of mushrooms. However, they say they need to do more research to know exactly why summer truffles are not radioactive.