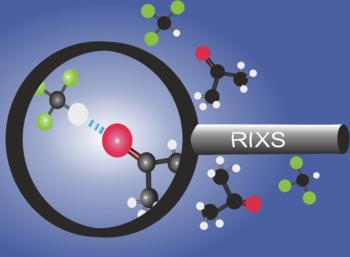 The team could observe for the first time with RIXS how the formation of hydrogen bonds does change C=O bonds in aceton molecules.

A team from Helmholtz-Zentrum Berlin has been able for the first time to measure how new bonds influence molecules: they have reconstructed the “energy landscape” of acetone molecules using measurement data from the Swiss Light Source (SLS) of the Paul Scherrer Institut, and thereby empirically established the formation of hydrogen bonds between acetone and chloroform molecules. The results have been published in Nature Scientific Reports and assist in understanding fundamental phenomena of chemistry.

Molecules are composed of atoms that maintain specific intervals and angles between one another. However, the shape of a molecule can change, for example, through proximity to other molecules, external forces and excitations, and also when a molecule makes a chemical connection with another molecule, for instance in a chemical reaction. A very useful concept in describing the changes that are possible in molecules is the use of what are called “potential surfaces” or energy landscapes. However, these are not actual surfaces in real space. They are more viewed as parameters defining the molecule, which can then be portrayed as a surface. An example would be the stretching of a carbon-oxygen bond, or the angle between various molecular groups. You can imagine such surfaces as being like hilly landscapes. If light excites part of the molecule into oscillation, the state of the molecule moves upward, energetically speaking, perhaps even up over a pass or a peak. It either returns finally to its previous energy minimum, or lands in a different energy dip that corresponds to altered angles or bond lengths. Some of these changes allow us to draw conclusions about hydrogen bonding with neighbouring molecules.

Response after excititation of the double bond C=O analysed

The team headed by Annette Pietzsch and Alexander Föhlisch has now for the first time succeeded in precisely measuring these extremely subtle surfaces surrounding a small molecule named acetone (C3H6O). They used the resonant inelastic X-ray scattering (RIXS) method at the Swiss Light Source of the Paul Scherrer Institut (PSI) in Switzerland for this work. “We chose to selectively excite the double bond between the carbon and oxygen atom of acetone into oscillation and analysed the responses in detail”, explains Annette Pietzsch. Thanks to the extremely high resolution of the measurement data, they were successful in mapping the potential surface along this C=O double bond.

In the second part of the experiment, they investigated a mixture of acetone and chloroform. A liquid mixture like this is denoted as azeotropic, meaning that the two ingredients can no longer be separated from one another through distillation. The scientists were now able for the first time to empirically observe how the acetone molecules linked tightly to the chloroform molecules via hydrogen bonding. They were able to identify in the measurement data the fingerprint of the hydrogen bonds that form between the C=O group of the acetone molecules and hydrogen groups of the chloroform molecules.

Finding a needle in the haystack

“In conclusion, we demonstrated how sub-natural line width vibrational resolved RIXS gives direct experimental access to the ground state potential energy surface around selected atomic sites and moieties, not accessible with other techniques. Our approach to the local ground state potential energy surface (...) resembles finding a needle in a haystack”, writes the team in its contribution published in the periodical Nature Scientific Reports. The performance of this approach will benefit strongly from upcoming high-brilliance synchrotrons and free-electron lasers in combination with upcoming high resolution RIXS instruments. Therefore, they foresee wide applicability of this technique to all thermal, collective and impurity driven chemistry and materials issues in the near future.