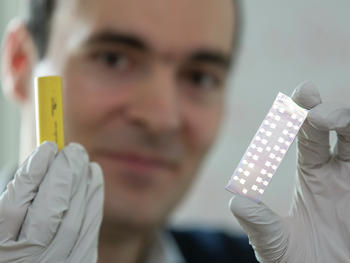 In the FFG project SolaBat, TU Graz is entering almost new research territory. Photovoltaic cells are to be combined into one device with electrochemical energy storage systems.

Whether fair weather or foul, sustainable energy supply must be independent of natural fluctuations of renewable energy sources, such as sunshine. The coupling of “green” energy sources with reliable energy storage systems is a concept as necessary as it is well-known. “Currently single systems of photovoltaic cells which are connected together – mostly lead-based batteries and vast amounts of cable – are in use. Solar panels on the roof with a battery in the cellar. This takes up a lot of space, needs frequent maintenance and is not optimally efficient,” points out Ilie Hanzu from TU Graz’s Institute of Chemistry and Technology of Materials. “We want to make a battery and solar cell hybrid out of two single systems which is not only able to convert electrical energy but also store it.” Hanzu and his team – in cooperation with Graz Centre for Electron Microscopy (ZFE) – is entering largely unknown scientific territory. In the SolaBat project they want to develop a new, application-relevant concept and test its capability.

The key to success lies in the new combination of functional materials. Hanzu explains: “In the hybrid system high-performance materials share their tasks in the solar cell and in the battery. We need materials which reliably fulfil their respective tasks and which are also electrochemically compatible with other materials so that they work together in one device.” Instead of environmentally damaging cobalt-containing electrodes, eco-friendly titanates will be used as the active materials. Polymer-based cells – in other words, organic solar cells – could also be used. “We have to know what happens when the materials come into contact with each other. For this reason, our project partner, the Centre for Electron Microscopy, is investigating the underlying fundamental interface effects and reactions,” say Hanzu. The other three work packages of the project concentrate on materials for the photovoltaic side and the battery side as well as the compatibility of materials and the assembly of both components into one device.

The advantages of a “2 in 1” hybrid system are obvious: it would be space saving, efficient and comparatively simple to manage. In the SolaBat project, the basics are being developed and tested, but even at this early stage a variety of potential applications of such a system are on the horizon – from mobile batteries and car batteries to larger solar panels. Hanzu explains: “Our preliminary work was very promising and I’m confident that at the end of SolaBat we will be able to present a working concept of a photovoltaic battery hybrid. Where exactly such a system will find application – as in many basic research projects – is too early to say, but the possibilities are in any case manifold.” Moreover, in battery research attention should be paid to the fact that different applications have different needs. “With batteries in micro applications or small appliances, such as smartphones, space-saving is primary and weight secondary. In the case of car batteries, in contrast, weight is the most important parameter, space not so much.”