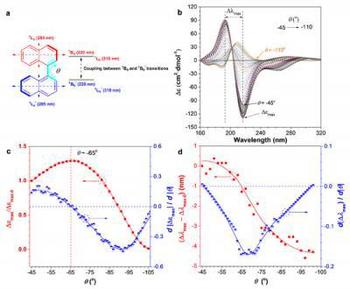 The Hong Kong University of Science and Technology 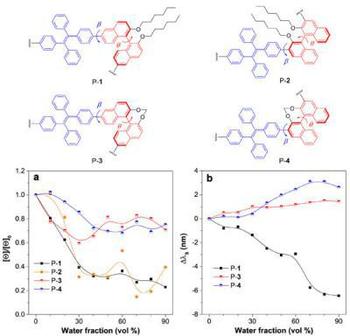 The Hong Kong University of Science and Technology

Chiral molecules are defined as molecules that are non-superimposable on their mirror image, much like that of left and right human hand bone structure. There are many examples of chiral molecules in nature, including proteins and deoxyribonucleic acid (DNA). The dynamic processes of these chiral molecules is highly significant to understanding their biological activity. Indeed, protein aggregation is associated with many pathological conditions, including Alzheimer's disease which is caused by the build-up of beta-amyloid fragments within the brain over time. Thus, it is important to understand and observe such (chiral) molecular aggregation and conformation over time.

This new method involves aggregation-annihilation circular dichroism (AACD) effect and a well-studied chiral molecule called 1,1'-binapthyl derivatives (BN). It was observed that the CD signals of the BN were annihilated after BN aggregates were formed, likely due to the conformational change of the 1,1'-binapthyl group during the aggregation process.

In their work, four BN-based chiral molecules (P-1 to P-4 respectively) were synthesized through simple Suzuki coupling reactions. Polymers with the "open" BN units showed clear signs of aggregation-annihilated chiral dichroism (AACD). When the BN units were locked, the annihilation is restrained. The polymers were first dissolved in an organic solvent, tetrahydrofuran (THF). The second step involved adding water, a poor solvent for the polymers, was gradually added to the solution, which led to aggregate formation. CD spectra of the different polymers were taken at different water fractions and analysed. This methodology allowed researchers to analyse the molecular aggregation process in real time.

A molecular dynamics (MD) simulation of the polymers was performed in THF and water to further examine the relationship between CD annihilation and conformational change. This model indicated that open P-1 showed a broad distribution of dihedral angle θ but locked P-3 showed a narrow distribution. From solution to aggregate, the ? in open polymers (P-1 and P-2) becomes more negative and part of the conformers relax from cisoid to transoid. The ? in locked polymers (P-3 and P-4) increases slightly and cisoid conformation is preserved throughout the aggregation process.

"The combination of MD simulation and analysis on the change of CD couplet intensity and wavelength splitting during the aggregation process is thus an appealing method of in-situ and real-time monitoring of the conformational change," said HKUST's Prof. Ben-Zhong TANG, who led this research.

"This is a far cheaper, simpler method of monitoring conformational changes in chiral macromolecules means that we can apply this method to understanding many biological processes more easily," said Dr. Haoke ZHANG, a co-author of the paper.