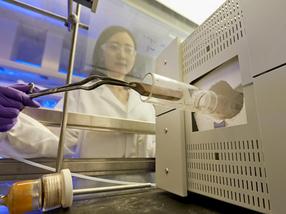 ORNL's Huiyuan Zhu places a sample of boron nitride, or "white graphene," into a furnace as part of a novel, nontoxic gas exfoliation process to separate 2-D nanomaterials.

A team of scientists led by the Department of Energy's Oak Ridge National Laboratory has developed a novel way to produce two-dimensional nanosheets by separating bulk materials with nontoxic liquid nitrogen. The environmentally friendly process generates a 20-fold increase in surface area per sheet, which could expand the nanomaterials' commercial applications.

"It's actually a very simple procedure," said ORNL chemist Huiyuan Zhu "We heated commercially available boron nitride in a furnace to 800 degrees Celsius to expand the material's 2D layers. Then, we immediately dipped the material into liquid nitrogen, which penetrates through the interlayers, gasifies into nitrogen, and exfoliates, or separates, the material into ultrathin layers."

Nanosheets of boron nitride could be used in separation and catalysis, such as transforming carbon monoxide to carbon dioxide in gasoline-powered engines. They also may act as an absorbent to mop up hazardous waste. Zhu said the team's controlled gas exfoliation process could be used to synthesize other 2D nanomaterials such as graphene, which has potential applications in semiconductors, photovoltaics, electrodes and water purification.

Because of the versatility and commercial potential of one-atom-thick 2D nanomaterials, scientists are seeking more efficient ways to produce larger sheets. Current exfoliation procedures use harsh chemicals that produce hazardous byproducts and reduce the amount of surface area per nanosheet, Zhu said.

Further research is planned to expand the surface area of boron nitride nanosheets and also test their feasibility in cleaning up engine exhaust and improving the efficiency of hydrogen fuel cells.