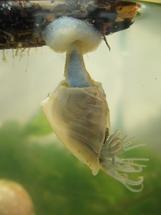 Adult Dosima attached to a piece of flotsam.

Barnacles exude an adhesive with exceptional bonding properties. In a project supported by the Austrian Science Fund FWF, biologists from Vienna have investigated this substance which has enormous medical and engineering potential and have thereby gained many new insights.

It was a typical case of serendipity. Strolling along a beach on the Danish North Sea coast during his holidays and looking at the flotsam beneath his feet, a German scientist from the Fraunhofer Institute discovered ‘buoy barnacles’, marine crustaceans with long, multi-articulated legs. These creatures adhered so firmly to bits of plastic, metal and other items that he found it impossible to detach them. His curiosity thus aroused, the biologist and expert for adhesives took an interest in the stalked barnacle Dosima fascicularis and decided to examine both the structure and the chemical composition and mechanical properties of the adhesive produced by this crustacean which had received little attention hitherto. This goal was achieved in a co-operative project between German and Austrian scientists together with colleagues from Ireland.

Morphology, particularly research regarding structures, is the specialty of the biologist Waltraud Klepal. Supported by the Austrian Science Fund FWF, Klepal and her team laid bare the structures of the buoy barnacle down to the level of individual cells at the Faculty of Life Sciences, University of Vienna. The PhD student Vanessa Zheden studied ultra-thin sections of Dosima, their thickness at nanometre scale, under an electron microscope. Only a few centimetres in diameter, the creature was also scanned in a computer tomograph in order to identify the position of the glands, discharge channels and pores, which create and secrete the biological super glue, conventionally known as ‘cement’.

The researchers from Vienna were rewarded with interesting discoveries. In its structure and volume, the cement is clearly different from that of all other known species. The buoy barnacle produces relatively large quantities of a foam-like hydrogel. Unlike its relatives, it uses the substance for two things: as an adhesive and as a float or buoy. This gives the sessile creature a degree of mobility and enables it to migrate to new habitats.

“The float is created when, in its larva stage, Dosima attaches itself to a small piece of seaweed, for instance, which it envelops with cement as an adult”, explains principal investigator Waltraud Klepal. The float can be up to three centimetres in diameter, its size adapting to the barnacle. The adhesive is first discharged via pores on the antennae and, later, on the stalk of the animal which floats in the water head down. This process creates a “sphere” of concentric layers with elastic bubbles on the inside, as the researchers were able to show using scanning electron microscopy.

As Dosima grows, new pores keep opening on the soft, flexible stalk, so as not to be “suffocated” by the cement. – This relocation of pores had been unknown to the scientists before. Another novel insight relates to the way each individual gland cell forms a discharge channel. “Individual components and organelles in the cell die off to make room for the duct through which the secretion is discharged”, Klepal notes. In order to survive in a wet environment and in the open sea, the outermost layer of the sphere hardens into something like an antibacterial bark.

A variety of possible applications

Serendipity thus put researchers on the track of a substance that has many more useful properties than hitherto assumed and is a unique natural adhesive. Not only does the cement secreted by Dosima have extremely good bonding properties, it is also elastic and acts like a shock absorber due to its porous structure. All of this makes the material a promising candidate for medicine and engineering applications, wherever a waterproof, shock-absorbing substance is needed. “In medicine, a porous structure provides a favourable scaffold for cell growth”, Klepal says in explaining possible applications. “In orthopaedics it might be used as a cushioning material, for instance as a vertebral disc.” The material is also ideal because it contains no toxins, as the Vienna team was able to demonstrate in initial cell culture experiments.

Klepal’s co-operation partners at the Fraunhofer Institute for Manufacturing Technology and Advanced Materials (IFAM) in Bremen examined the biochemical structure of the cement, which consists of 92 percent water. The rest is proteins and carbohydrates, likewise distinct from the cement of other species in its nature and amount. A striking feature is the lack of disulphide bridges which contribute to the stability and insolubility of adhesives in other marine animals. The gas in the bubbles is probably carbon dioxide, either a metabolic byproduct of the animal or formed when the cement, which consists mainly of acidic proteins, comes in contact with seawater. Investigations are continuing. “Our basic research has provided important input to the project with an eye to applications for the cement. The next steps will involve investigations in the direction of genetic analysis and applied research”, Klepal concludes.