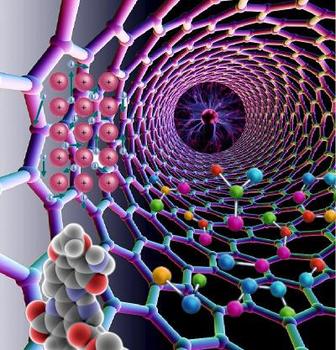 A schematic illustration of hydroprocessing of Jatropha oil into biofuels over a high-performance Ni-HPW/CNT catalyst. It shows a significant performance boost in the catalytic process due to the excellent electroconductivity and coking tolerance of the CNT support.

Hydroprocessing of vegetable oil is widely used to produce biodiesel. The catalyst is very significant for the performance of the process. As an electric charge carrier, the researchers found that the velocity of electron reaches the speed of light 1/ 300 in graphene, far more than the normal conductor. Carbon nanotubes (CNT) are constructed of rolled up graphene sheets with one dimensional extended π conjugated structures.

A team of researchers from the Beihang University in China, Beijing has demonstrated that CNT catalysts showed efficient cracking activity. The electroconductivity of the CNT support was especially beneficial for the improvement of catalyst activity. The nickel (Ni) and phosphotungstic acid (HPW) supported on CNT were prepared by the team as catalyst for hydroprocessing of Jatropha oil. Their report appears in the December issue of the journal NANO.

The alkanes yield of C15-C18 was 88.5 wt%, Iso/n ratio was 0.8 and conversion was 97.7% at 320 °C, 3.0 MPa and 1.0/h over the Ni-HPW(40)/CNT catalyst, while the yield of < C15 alkanes reached 51.9 wt% at 400 °C. The distribution of products could be adjusted by reaction temperature. The activity of metal sites was affected by the transformation of oxidation/ reduction of Ni species, which required high electroconductivity of the support. The activity of acids sites was also closely related to the electroconductivity of the support. Thus, the cracking performance was elevated by the addition of Ni or HPW and the electroconductivity of the support. The cracking activity was enhanced by the increased acidity of the catalyst, which resulted in more carbenium ions formed, and the carbenium ion stimulated the isomerization reaction. The transfer of hydrogen electron was accelerated by the electroconductivity of the catalyst, which enhanced the cracking activity of the catalyst, and the results coincided with the formation mechanism of catalyst acidity. The formation of carbenium ion promoted the β-elimination process, which then launched the two circulations for further cracking. The ability of coking tolerance may be related to the morphology of the catalyst and the repulsive force between carbon atoms. Meanwhile, the catalyst was used without sulfurization and the cracking process was green. "This catalyst can be regarded as an attractive candidate for cracking conversion of vegetable oils due to its high performance and clean properties " according to Xiaosong Yang, the senior author of the paper. The Beihang University team is currently exploring catalysts with high performances.