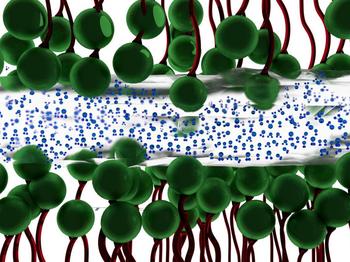 The University of Akron

Researchers at The University of Akron have discovered that a thin layer of water (blue molecules ) between two charged surfaces composed of surfactants (green molecules) --becomes ice-like, lessening the friction between the two surfaces.

New research by scientists at The University of Akron (UA) shows that a nanometer-thin layer of water between two charged surfaces exhibits ice-like tendencies that allow it to withstand pressures of hundreds of atmospheres. The discovery could lead to better ways to minimize friction in a variety of settings.

"For the first time we have a basic understanding of what happens to water under these conditions and why it keeps two surfaces apart," says Professor Ali Dhinojwala. "We had suspected something was happening at the molecular level, and now we have proof."

"This discovery could lead to improved designs where low friction surfaces are critically important, such as in biomedical knee implants," says UA graduate student Nishad Dhopatkar.

Graduate student Adrian Defante, who was also part of the research team, says "the newfound properties of water might contribute to the development of more effective antimicrobial coatings, as a thin layer of water could prevent bacterial adhesion."

Dhinojwala adds that the research conversely offers insight into how water might be kept away from two surfaces, which could lead to better adhesives in watery environments.