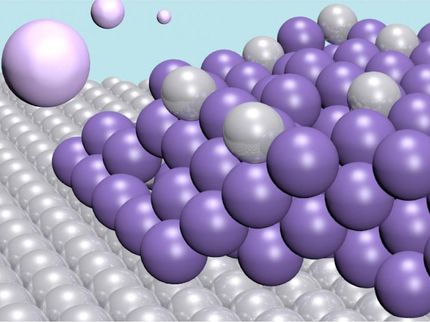 When mercury ions (light purple) in a liquid come near an electrode of platinum, they are attracted to the electrode's surface where they get reduced to metallic mercury. On the electrode, mercury atoms (dark purple) and platinum atoms (grey) develop into a very strong alloy, and the mercury is thus removed from the water. 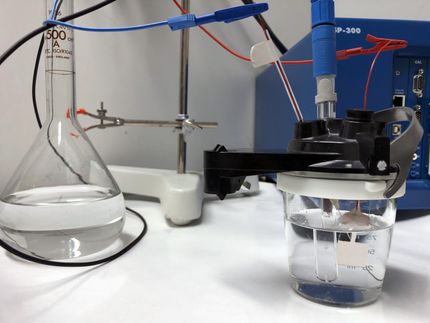 The lab tests have shown that the new method can remove more than 99 per cent of mercury from a liquid. A metal plate -- an electrode -- draws the mercury out by binding with it. The electrode consists of the noble metal platinum, and through an electrochemical process it draws out the mercury, so that an alloy of the metals is created. In this way the water is cleaned. The alloy of the two metals is very stable, meaning there is no risk of the mercury re-entering the water.

Water which has been contaminated with mercury and other toxic heavy metals is a major cause of environmental damage and health problems worldwide. Now, researchers from Chalmers University of Technology, Sweden, present a totally new way to clean contaminated water, through an electrochemical process.

"Our results have really exceeded the expectations we had when we started with the technique," says the research leader Björn Wickman, from Chalmers' Department of Physics. "Our new method makes it possible to reduce the mercury content in a liquid by more than 99%. This can bring the water well within the margins for safe human consumption."

According to the World Health Organisation (WHO), mercury is one the most harmful substances for human health. It can influence the nervous system, the development of the brain, and more. It is particularly harmful for children and can also be transmitted from a mother to a child during pregnancy. Furthermore, mercury spreads very easily through nature, and can enter the food chain. Freshwater fish, for example, often contain high levels of mercury.

In the last two years, Björn Wickman and Cristian Tunsu, researcher at the Department of Chemistry and Chemical Engineering at Chalmers, have studied an electrochemical process for cleaning mercury from water. Their method works via extracting the heavy metal ions from water by encouraging them to form an alloy with another metal.

"Today, cleaning away the low, yet harmful, levels of mercury from large amounts of water is a major challenge. Industries need better methods to reduce the risk of mercury being released in nature," says Björn Wickman.

Their new method involves a metal plate - an electrode - that binds specific heavy metals to it. The electrode is made of the noble metal platinum, and through an electrochemical process it draws the toxic mercury out of the water to form an alloy of the two. In this way, the water is cleaned of the mercury contamination. The alloy formed by the two metals is very stable, so there is no risk of the mercury re-entering the water.

"An alloy of this type has been made before, but with a totally different purpose in mind. This is the first time the technique with electrochemical alloying has been used for decontamination purposes," says Cristian Tunsu.

One strength of the new cleaning technique is that the electrode has a very high capacity. Each platinum atom can bond with four mercury atoms. Furthermore, the mercury atoms do not only bond on the surface, but also penetrate deeper into the material, creating thick layers. This means the electrode can be used for a long time. After use, it can be emptied in a controlled way. Thereby, the electrode can be recycled, and the mercury disposed of in a safe way. A further positive for this process is that it is very energy efficient.

"Another great thing with our technique is that it is very selective. Even though there may be many different types of substance in the water, it just removes the mercury. Therefore, the electrode doesn't waste capacity by unnecessarily taking away other substances from the water," says Björn Wickman.

Patenting for the new method is being sought, and in order to commercialise the discovery, the new company Atium has been set up. The new innovation has already been bestowed with a number of prizes and awards, both in Sweden and internationally. The research and the colleagues in the company have also had a strong response from industry.

"We have already had positive interactions with a number of interested parties, who are keen to test the method. Right now, we are working on a prototype which can be tested outside the lab under real-world conditions."