Filming light and electrons coupled together as they travel under cover 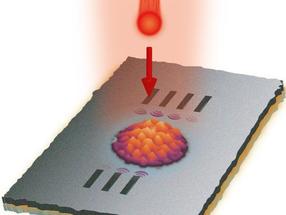 An illustration of the experimental set-up described in this study

In a breakthrough for future optical-electronic hybrid computers, scientists at EPFL have developed an ultrafast technique that can track light and electrons as they travel through a nanostructured surface.

When light couples to electrons on a surface, their concerted motion can travel as a wave guided by the surface geometry itself. These waves are known as "surface plasmons" and might be useful in telecommunications and future computing, where data will be shuttled across processors using light instead of electricity. Aside from being more energy-efficient, these processors could be miniaturized down to the nanoscale to build high-resolution sensors and nanosized signal processing systems. But these processors would be built from stacking different layers of advanced materials and, so far, we don't have a reliable way of tracking the guided light as it moves across their interfaces. EPFL scientists have now done exactly that using a new, ultrafast method.

The lab of Fabrizio Carbone at EPFL led the project to create a tiny antenna array that would allow plasmons to travel across an interface. The array consisted of an extremely thin membrane of silicon nitride (50 nm thick) covered with an even thinner film of silver (30 nm thick). The scientists then "punched" a series of nano-holes through the surface that would act as the antennas -- the plasmon "hotspots".

The researchers then fired ultrafast laser pulses (light) onto the array to light up the antennas. With a controlled temporal delay, ultrashort electron pulses were then fired across the multilayer stack, to map the plasmons radiated by the antennas at the interface between the silver film and the silicon nitride membrane. Using an ultrafast technique called PINEM, which can "see" surface plasmons, even when they are bound to a buried interface, the scientists were able to actually film the propagation of the guided light and read its spatial profile across the film.

"Trying to see plasmons in these interfaces between layers is a bit like trying to film people in a house from the outside," explains Fabrizio Carbone. "A regular camera won't show you anything; but if you use microwave or a similar energy-tracking imaging, you can see right through the walls."

The current paper paves the way for designing and controlling confined plasmonic fields in multilayered structures, which is key for future optoelectronic devices.