Proton is seen escaping the molecule 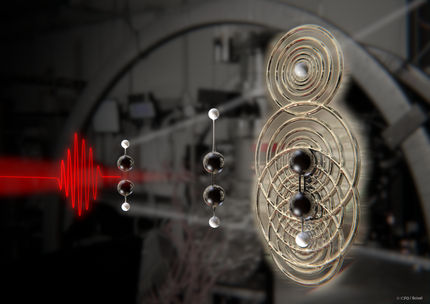 A schematic illustration of the molecular bond breakup in acetylene (C2H2).

Imagine what it would be like to watch how the individual atoms of molecules rearrange during a chemical reaction to form a new substance, or to see the compounds of DNA move, rearrange and replicate. Such capability would give unprecedented insight to understand and potentially control the processes.

The simple idea of watching how molecules break, or transform, during chemical reactions has, until now, been unfathomable since it requires tracking all of the atoms, which constitute a molecule, with sub-atomic spatial and few-femtosecond temporal resolution. Hence, taking such "snapshots" with a combined spatio-temporal resolution to witness a molecular reaction was considered fodder for science fiction. Exactly 20 years ago, one of the ideas proposed considered using the molecule's own electrons to image its structure: Teach the molecule to take a selfie! The idea was brilliant but impossible to implement - until today.

In their recent study, reported in Science, ICFO researchers from the Attoscience and Ultrafast Optics Group in collaboration with researchers from the USA, the Netherlands, Denmark and Germany, have reported on the imaging of molecular bond breakup in acetylene (C2H2) nine femtoseconds (1 femtosecond = 1 millionth of a billionth of a second) after its ionization. The team was able to track the individual atoms of the isolated acetylene molecule with a spatial resolution as small as 0.05 Ångström - less than the width of an individual atom - and with a temporal resolution of 0.6 femtoseconds. What's more, they were able to trigger the breakup of only one of the bonds of the molecule and see how one proton leaves the molecule.

"Our method has finally achieved the required space and time resolution to take snapshots of molecular dynamics without missing any of its events, and we are eager to try it out on other molecular systems such as chemical catalysts and bio-relevant systems" said Jens Biegert, ICREA professor at ICFO and leader of the research.

Teaching a molecule to take a selfie

The team developed a world-leading ultrafast mid-IR laser source and combined it with a reaction microscope to detect the 3D momentum distribution of electrons and ions in full kinematic coincidence. In the experiment, a single isolated acetylene molecule was oriented in space with a short laser pulse. A strong enough, follow up, infrared pulse liberated one electron from the molecule, accelerated it on a returning trajectory and forced it to scatter off its own parent molecular ion, all within only 9 femtoseconds.

Benjamin Wolter explained, "the flight path and kinetic energy of all collision fragments were recorded with the reaction microscope similar to a big particle physics experiment."

After some clever data processing, the team was able to extract the entire molecular structure and, moreover, they could show that orienting the molecule along the electric field of the laser, or perpendicular to it, completely changed its dynamics. In one case, the molecule underwent vibrational motion with the laser field, while in the other case a C-H bond was clearly broken. The experiment is the first direct visualization of bond cleavage and observation of the proton during its departure from the [C2H2]2+ ion, something that was never seen before.

"We took one electron, steered it along a specific path with the laser and scattered it off an isolated molecule to record its diffraction pattern" said Biegert, "it is mind-boggling to imagine the length and time scales of the experiment. The fantastic cooperation between experimentalists and theorists, atomic physicists and quantum chemists from ICFO, Kansas State University, Max-Planck-Institut für Kernphysik, Physikalisch Technische Bundesanstalt, Center for Free Electron Laser Science/DESY/CUI, Aarhus University, Friedrich-Schiller University Jena, Leiden University, and Universität Kassel made it possible to achieve such feat".