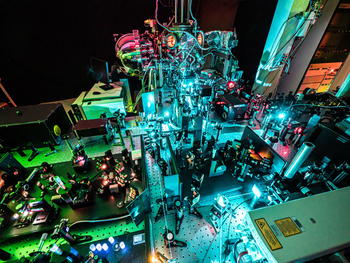 The scientists tracked the orbital tomograms with ultrahigh resolution through time. For this purpose, the electrons in the molecules were excited into a different orbital with femtosecond laser pulses.

In textbooks and explanatory videos, they are often depicted as colourful balloons or clouds: electron orbitals provide information on the whereabouts of electrons in molecules, a bit like fuzzy snapshots. In order to understand the exchange of electrons in chemical reactions, it is not only important to know their spatial distribution but also to be able to trace their motion in time. Scientists from Jülich, Marburg, and Graz have now made huge progress in this direction. They combined state-of-the-art methods used in laser and electron spectroscopy and successfully recorded orbital images with an extremely high temporal resolution.

"For decades, chemistry has been governed by two ambitions goals," says Professor Stefan Tautz, head of the Quantum Nanoscience subinstitute at Forschungszentrum Jülich. "One of these is understanding chemical reactions directly from the spatial distribution of electrons in molecules, while the other is tracing electron dynamics over time during a chemical reaction." Both of these goals have been achieved in separate ground-breaking discoveries in chemistry: frontier molecular orbital theory explained the role of the electron distribution in molecules during chemical reactions, while femtosecond spectroscopy made it possible to observe transition states in reactions. "It has long been a dream of physical chemistry to combine these two developments and to then trace electrons in a chemical reaction in time and space."

The scientists have now come a huge step closer to achieving this goal: they observed electron transfer processes at a metal—molecule interface in space and time. Such interfaces are the focus of research in the German Research Foundation’s Collaborative Research Centre 1083 at Philipps-Universität Marburg, and it was experiments conducted here that lead to today’s publication. "Interfaces initially appear to be no more than two layers side by side, whereas they are in fact the place where the functions of materials come into being. They therefore play a decisive role in technological applications," says Ulrich Höfer, professor of experimental physics at Philipps-Universität Marburg and collaborative research centre spokesman. In organic solar cells, for example, combining different materials at an interface improves the splitting of the states excited by incident light, thus allowing electricity to flow. Interfaces also play a key role in organic light-emitting diode (OLED) displays used in smartphones, for example.

The experimental approach used by the scientists is based on a breakthrough made a few years ago in molecular spectroscopy: photoemission orbital tomography, which itself is based on the well-known photoelectric effect. "Here, a layer of molecules on a metal surface is bombarded with photons, or particles of light, which excites the electrons and causes them to be released,” says Professor Peter Puschnig from the University of Graz. “These released electrons do not simply fly around in space, but – and this is the decisive point – based on their angular distribution and energy distribution, they provide a good indication of the spatial distribution of electrons in molecular orbitals."

"The key result of our work is that we can image the orbital tomograms with ultrahigh resolution over time," says Dr. Robert Wallauer, group leader and research assistant at Philipps-Universität Marburg. To do so, the scientists not only used special lasers with ultrashort pulses in the femtosecond range to excite the electrons in the molecules; they also used a novel impulse microscope which simultaneously measured the direction and energy of the electrons released with very high sensitivity. One femtosecond is 10-15 seconds – a millionth of a billionth of a second. In relation to a second, this is as little as a second in relation to 32 million years. Such short pulses are like a kind of strobe light and can be used to break down fast processes into individual images. This enabled the researchers to trace the electron transfer as if in slow motion. “This allowed us to spatially trace the electron excitation pathways almost in real time,” says Tautz. "In our experiment, an electron was first excited from its initial state into an unoccupied molecular orbital by a first laser pulse before a second laser pulse enabled it to finally reach the detector. Not only could we observe this process in detail over time, but the tomograms also allowed us to clearly trace where the electrons came from."

"We believe that our findings represent a crucial breakthrough towards the goal of tracing electrons through chemical reactions in space and time," says Ulrich Höfer. "In addition to the fundamental insights into chemical reactions and electron transfer processes, these findings will also have very practical implications. They open up countless possibilities for the optimization of interfaces and nanostructures and the resulting processors, sensors, displays, organic solar cells, catalysts, and potentially even applications and technologies we haven't even thought of yet."