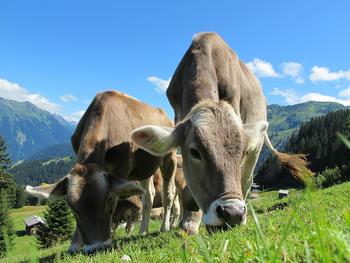 “Organic” food might not always mean what you think it means. A team of TU Dresden food scientists headed by Prof. Dr. Thomas Henle were now successful in developing a new method to distinguish organic from conventionally produced milk.

Conventionally fed cows usually get concentrated feed that has been heated more or less. During heating, the so-called glycation compounds are formed from reactions between sugar and proteins, which can be measured in the milk. Organically fed cows only get non-heated feed such as grass or silage. Thus, organic milk is supposed to contain fewer glycated proteins.

The research team headed by Prof. Dr. Thomas Henle is therefore able to prove “species-appropriate” feeding of dairy cattle by measuring the amount of glycated proteins in the milk. Heated feed is not supposed to be part of the “natural” diet of cows. According to Prof. Henle, the only species that cooks its food is the human being. Consequently, human milk usually contains a comparably substantial amount of glycation compounds, depending on the diet of the mother.

Doctoral candidate Thomas Hofmann is going to present this new method on 31 March 2017 in the course of the regional conference of the Society of Food Chemistry (Lebensmittelchemische Gesellschaft). His research group has also filed a patent application for the method. The long-term perspective of their research is to discuss new parameters of the question “What is species-appropriate feeding?”