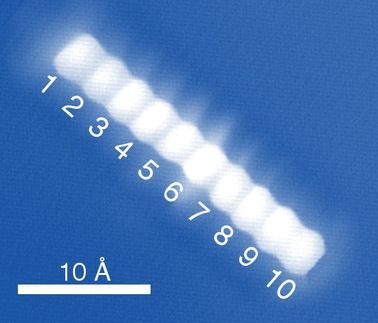 Acenes are molecules formed by the linear fusion of special carbon-based hexagons, widely known as ‘benzene rings’. In spite of its structural simplicity, these molecules have attracted huge attention due to their unique electronic properties; pentacene, for example, a member of this family with five linear rings, is considered as one of the most relevant organic semiconductor to build photoelectronic devices, while larger acenes present intriguing properties that have fascinated scientists for decades. However, long acenes are unstable molecules, which cannot be found in natural sources. The obvious alternative is to access these molecules by chemical synthesis, but this approach becomes more challenging as the length of the molecule increases. In fact, nonacene (nine rings linearly fused) was the largest acene detected to date in 2010.

In a new paper that has just been published online in the International Edition of Angewandte Chemie, scientists from the Institute for Materials Science and Center for Advancing Electronics at Technische Universität of Dresden - TUD (Chair of Prof. Gianaurelio Cuniberti) and the research center CiQUS (University of Santiago de Compostela) have been able to generate elusive decacene, a molecule formed by the linear fusion of ten benzene rings, the longest acene prepared ever. Throughout this research collaboration, led by professors Francesca Moresco (TUD) and Diego Peña (CiQUS), chemists from CiQUS prepared stable decacene precursors by solution chemistry, while physicists from TUD used these precursors to prepare decacene on a gold surface under ultra-high vacuum, in order to stabilise this extremely reactive compound. As a result, individual decacene molecules were visualised by high-resolution Scanning Tunneling Microscopy (STM).

A feat of collaborative European research

The outcome of this work demonstrates that collaborations between synthetic chemists and surface scientists can lead to the achievement of long-standing chemical challenges, as evidenced by this research. The study has been developed in the framework of the EU Project PAMS, oriented to the fabrication of nanosized electronic devices (Planar Atomic and Molecular Scale devices), and scientists involved have dedicated it to the memory of Prof Erich Clar, who is widely-considered a pioneer in the field of acene chemistry.