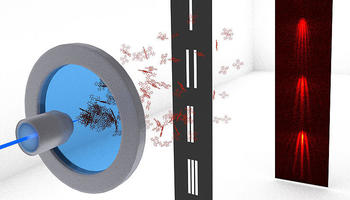 In quantum mechanics particles can behave as waves and take many paths through an experiment, even when a classical marble could only take one of them at any time. However, it requires only combinations of pairs of paths, rather than three or more, to determine the probability for a particle to arrive somewhere. This principle is a consequence of Born’s rule, a cornerstone of quantum physics and any measured violation of it might hint at new physics. Now, researchers at the Universities of Vienna and Tel Aviv have addressed this question for the first time explicitly using the wave interference of large molecules behind various combinations of single, double, and triple slits. The analysis – published in the Journal ‘Science Advances’ – confirms the formalism of established quantum physics for massive particles.

Quantum mechanics describes how matter behaves on the smallest mass and length scales. However, the absence of quantum phenomena in our daily lives has triggered a search for minimal modifications of quantum mechanics, which might only be noticeable for massive particles. One candidate is to search for so-called higher-order interference. In standard quantum mechanics, the interference pattern resulting from an arbitrary number of non-interacting open paths can always be described by all combinations of pairs of paths. Any remaining pattern would be due to higher-order interference and be a possible indicator for new physics.

While this rule has been tested before with light and microwave radiation, researchers at the Universities of Vienna and Tel Aviv have now run for the first time a dedicated experiment with massive molecules. “The idea has been known for more than twenty years. But only now do we have the technological means to bring all the components together and build an experiment capable of testing it with massive molecules,” says Christian Brand, one of the authors of the study.

In their experiments at the University of Vienna, researchers of the Quantum Nanophysics Group headed by Markus Arndt prepared complex organic molecules as matter waves. This was achieved by evaporating them from a micron-sized spot in high vacuum and letting them evolve freely for some time. After a while, each molecule delocalized, spreading across many places at once. This means that when each molecule encounters a mask containing multiple slits, it can traverse many of the slits in parallel. By carefully comparing the position of molecules arriving at the detector behind a combination of single-, double- and triple slits they were able to place bounds on any multipath contribution.

A crucial component of the experiment is the mask - an ultra-thin membrane into which arrays of single-, double- and triple-slits were fabricated. It was designed and fabricated by Yigal Lilach and Ori Cheshnovsky at Tel Aviv University. They had to engineer a diffraction mask, where the maximum deviation in the slit dimensions was not much larger than the size of the molecules it was diffracting. The mask was integrated in the Vienna laboratory and the researchers studied a broad range of molecular velocities in the same experimental run. For all of them, the scientists found the interference pattern to follow the expectations of standard quantum mechanics with an upper bound in the deviation of less than one particle in a hundred. “This is the first time an explicit test of this kind has been conducted with massive particles”, says Joseph Cotter, the first author of this publication. “Previous tests have pushed the frontiers with single photons and microwaves. In our experiment, we put bounds on higher-order interference of massive objects.”