Direct conversion of methane to methanol 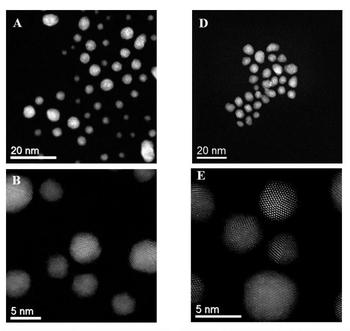 Representative HAADF images and particle size distributions for the unsupported AuPd-PVP sol in the fresh (A to C) and after a CH4 oxidation reaction (D to F).

Liquid methanol is widely used as a feedstock for other chemicals and also has considerable potential as an alternative fuel source. However, converting methane--the primary component of abundant natural gas--into methanol is currently achieved by an indirect process which requires high heat and pressure.

Now researchers have discovered a new approach that allows the direct conversion of methane to methanol utilizing molecular oxygen under much milder reaction conditions.

"Our work has shown that if a stable supply of methyl radicals can be established--for example, by incorporating a very small amount of hydrogen peroxide into the reaction mixture--then the selective oxidation of methane to methanol using molecular oxygen is entirely feasible," said Kiely, the Harold B. Chambers Senior Professor Materials Science and Chemical Engineering at Lehigh.

This latest discovery has been guided by Kiely's and Hutchings' longtime collaboration on developing Au-Pd nanoparticles as effective catalysts for many other reactions.

According to Kiely, the researchers were surprised to find that for this particular reaction to proceed they needed the Au-Pd nanoparticles to exist as free-floating colloids in a very weak hydrogen peroxide solution into which they injected pressurized methane and oxygen gas.

"Usually when we use Au-Pd nanoparticles as catalysts they are nearly always dispersed on high surface area oxide supports such as titania," said Kiely. "In this case however, the presence of the ceramic support turned out to be highly detrimental."

In the chemical industry methane is currently indirectly converted to methanol via the production of synthesis gas (CO + H2) at high temperatures and pressures, which is an expensive and energy intensive process. The most promising candidate processes discovered to date for the direct conversion of methane to methanol have tended to be complex, inefficient, and often require very high temperatures and aggressive reaction environments.

"The new simplified approach we have demonstrated brings us a step closer to making the direct conversion of methane to methanol a practically viable proposition," said Kiely.