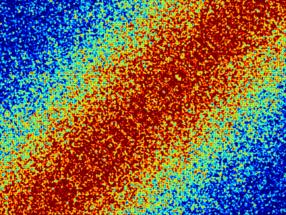 Metallic glasses and humans inhabit the same universe: they age. In time, their physical properties change towards a distinct direction. Researchers from the University of Göttingen and the European Synchrotron ESRF in Grenoble have now discovered a surprising effect in ultrastable metallic glasses. When subjected to typical aging conditions, this new class of metallic glasses evolved inversely – they showed anti-aging.

“The source of its advantage is also the weak point of a metallic glass and forms a huge drawback in terms of usability,” explains Martin Lüttich, PhD student at Göttingen University’s I. Physical Institute and co-author of the study. “This is a crucial problem for applications which rely on the constancy and permanence of the used material.” The studied ultrastable metallic glass is produced on a new path of glass formation and benefits from a drastically enhanced mobility of the atoms during preparation. This leads to enhanced properties compared to conventionally produced metallic glasses.