On the pathway to novel hydrogen storage materials 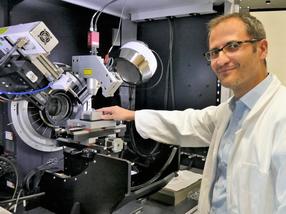 Dr. Claudio Pistidda at a diffractometer for testing new materials. 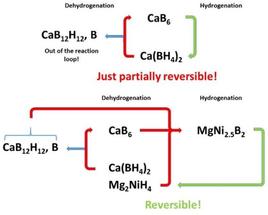 Scheme of the mechanism for storing hydrogen with calcium borohydride with the addition of magnesium nickel hydride.

Scientists at the Helmholtz-Zentrum Geesthacht and their European partners have developed a new chemical system for storing solid hydrogen. The special combination of hydrides allows overcoming some of the most serious drawbacks associated to the use of this class of materials. This represents a real milestone in the development of hydrogen storage technology for mobile and stationary applications.

Hydrogen can be a climate and environmentally friendly carrier of energy if generated with the help of wind or solar energy. Unlike with conventional fuels, neither harmful carbon dioxide nor soot particles are released during its subsequent use.

For mobile use, hydrogen is currently mostly stored in pressurized gas tanks, which have a fairly large volume and occupy respective space in the vehicles. High pressures of up to 900 bar are required for charging. To withstand these pressures, special tanks made of high-quality non-recyclable fiber reinforced polymeric materials have to be used.

Solid instead of pressurized gas store

Scientists at the Helmholtz-Zentrum Geesthacht have been working on the development of so-called solid state storage systems since the late 90s. In Geesthacht, they use innovative light metal-based systems for this purpose. “For many years, we have been studying the possibility to use complex metal hydrides as storage media,” explains Dr Claudio Pistidda, materials researcher at the Helmholtz-Zentrum Geesthacht and one of the authors of the current publication.

These so-called complex metal hydrides can store more hydrogen in less space than high-pressure tanks. Apart from that, the significantly lower charging pressures required by solid-state hydrogen stores make it possible to use less expensive and more environmentally friendly tanks in automobiles.

“One of the big challenges in the search for the right material has been that the storage capacity decreases with each charge,” says Pistidda.

A similar problem is known in electric storage: at some point, the storage medium of a battery loses its power and it can therefore not be charged and discharged an infinite number of times.

After many years, a system capable to potentially solve the decay constraint was developed. For the first time, Pistidda and his colleagues were able to observe and prove in the laboratory that calcium borohydride in combination with magnesium-nickel hydride can release hydrogen, forming a single boron-containing phase that upon hydrogen charging reversibly donates the boron atoms back to form again calcium borohydride.