Surprise from the jungle soil

Soil microorganisms in the Amazon rainforest can affect atmospheric chemistry 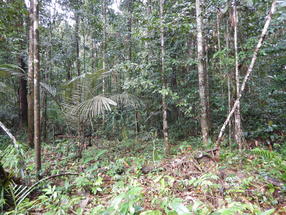 The trees of the Amazon rainforest emit huge amounts of volatile substances.

The Amazon rainforest is the largest forest on earth. Its trees emit huge amounts of volatile substances that influence the chemical composition of the air. Some of these substances are the so-called sesquiterpenes, very reactive chemicals that can rapidly consume ozone. Until recently scientists studying the air composition in forests were primarily focused on trees and plants.

An international research team has now revealed, that the soil emissions of sesquiterpenes can be, under certain conditions, just as strong as those from the canopy. The molecules are produced by microorganisms in the soil. This discovery shows that the emissions from soil to air are an important component of the Amazonian ecosystem that had been previously overlooked.

“In previous studies, we found an ozone gradient in the Amazon forest with low levels near the soil. We thus suspected that we were missing an important source of reactive molecules removing the ozone,” said Jonathan Williams, group leader at the Max Planck Institute for Chemistry.

Sesquiterpenes react rapidly with ozone and can therefore impact the self-cleaning capacity of the atmosphere – a chemical process, whereby pollutants are removed from the air. The soil emissions are responsible for the depletion of about 50 percent of the ozone close to the forest floor which slows down the cleaning processes and can help pollinating insects find flowers via their scent.

The scientists first collected soil samples from several different sites in the Amazon jungle, most of them from the Amazon Tall Tower Observatory (ATTO), representing pristine Amazonian forest. Under controlled laboratory conditions, they then added water to simulate rain, and watched for volatile emissions as the soil dried out. As the drying progressed, conditions in the soil changed to suit different communities of soil microbes, each of which emitted different characteristic chemicals including sesquiterpenes.

"We found very similar patterns of sesquiterpene emissions and microbial activity in the soil," says Thomas Behrendt, soil scientist at the Max Planck Institute for Biogeochemistry in Jena. Based on the experimental results, Efstratios Bourtsoukidis, an atmospheric chemist at the Max Planck Institute for Chemistry, developed a precise numerical model to predict the fluxes of sesquiterpenes between the soil and the atmosphere. When simulating the daily fluxes from a very common tropical soil and the canopy over a period of two years, Bourtsoukidis observed that sesquiterpene emissions from the soils in the dry season were at certain times as strong as canopy emissions.

The study results show how important the connection between soil microbes and atmospheric chemistry is.