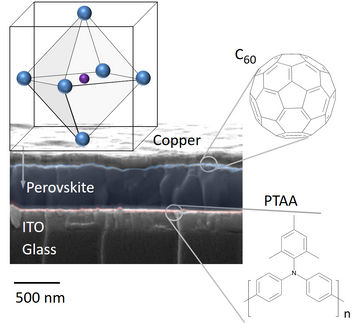 With additional layers between the perovskite semiconductor and the hole- and electron-transportlayers (red and blue lines), the team at the University of Potsdam was able to further increase efficiency of the perovskite cell.

In perovskite solar cells, charge carriers are mainly lost through recombination occurring at interface defect sites. In contrast, recombination at defect sites within the perovskite layer does not limit the performance of the solar cells at present. Teams from the University of Potsdam and the Helmholtz-Zentrum Berlin (HZB) were able to reach this interesting conclusion through extremely accurate quantitative measurements on 1 cm2 perovskite cells using photoluminescence. Their results contribute to improving  perovskite solar cells and have now been published in Nature Energy.

Even solar cells made of a perfect miracle material would never be able to convert 100 % of sunlight to electrical energy. This is because the theoretical maximum achievable power is limited by the position of the energy bands of the electrons, and by unavoidable radiation of photons (the thermodynamic or Shockley-Queisser limit). Maximum power conversion efficiency for silicon is about 33 %, for example. But even this value will never actually be reached. This is due to defects of various kinds causing the loss of some of the charge carriers released by sunlight. In order to approach the maximum value, it is therefore necessary to investigate the various defects in solar cells and determine which ones lead to losses and how.

Organometallic perovskite absorber layers are regarded as a particularly exciting new material class for solar cells – in just ten years, their efficiency has increased from three per cent to over twenty per cent, an amazing success story. Now a team headed by Prof. Dr. Dieter Neher at the University of Potsdam and Dr. Thomas Unold at HZB has succeeded in identifying the decisive loss processes in perovskite solar cells that limit the efficiency.

To determine this, the scientists employed photoluminescence techniques with high precision, spatial and temporal resolution. Using laser light, they excited the square-centimetre-sized perovskite layer and detected where and when the material emitted light in response to the excitation. “This measurement method at our lab is so precise, we can determine the exact number of photons that have been emitted”, explains Unold. And not only that, the energy of the emitted photons was precisely recorded and analyzed as well using a hyperspectral CCD camera.

“In this way, we were able to calculate the losses at every point of the cell and thereby determine that the most harmful defects are located at the interfaces between the perovskite absorber layer and the chargetransport layers“, reports Unold. This is important information for further improving perovskite solar cells, for instance by means of intermediate layers that have a positive effect or through modified fabrication methods.

With the help of these findings, the group led by Prof. Dr. Dieter Neher and Dr. Martin Stolterfoht at the University of Potsdam has succeeded in reducing interfacial recombination and thus increasing the efficiency of 1cm2sized perovskite solar cells to well over 20 %.