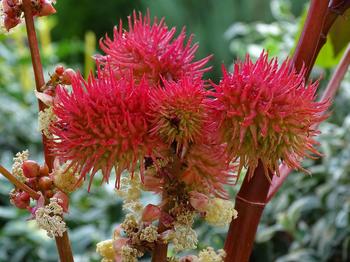 The development of future technologies that are not based on mineral oil and can be used for producing chemicals and plastics is one of the major tasks in modern materials science and a key challenge that needs to be addressed if sustainable industrial production is to have a future. A range of theoretical concepts and laboratory processes must be devised and tested to resolve challenges and problems arising in connection with the natural materials before potential applications for materials obtained from renewable resources can be probed. One such concept has just been described by Professor Stefan Mecking in a current study on obtaining polyester from castor oil entitled “Synthetic Polyester from Plant Oil Feedstock by Functionializing Polymerization” in the journal “Angewandte Chemie”.

With his colleague Dr Ye Liu, an Alexander von Humboldt Fellow and the first author of the study, Stefan Mecking presents a new way of obtaining polyester from fats and oils, more specifically, from castor oil. A well-known and chemically established building block that can be obtained from castor oil is Undecenol. “Our idea was to interlink many of these molecules to form one large molecule, a plastic molecule. We wanted the whole process to be effective and readily accomplishable ‘in one go’”, Stefan Mecking elaborates. Undecenol has a group of alcohols at one end of the molecule and a double bond at the other. It was decisive to interlink these two groups to form an ester group in such a way as to enable simultaneous linkage with long-chain molecules, i.e. plastics. Such long-chain bonds are required to obtain the desired material properties. One of the major general challenges in regard to these procedures is to identify suitable catalysts. “They are especially important because the reaction leading up to the formation of the desired long-chain molecules must be incredibly effective and proceed without any variance”, explains Stefan Mecking.

For the production of polyester as described in their study, the chemists used carbonylation to obtain the ester groups. “The problem is that Undecenol reacts with another smaller molecule, an aldehyde. If this happens, it does not become part of the molecule chain, which means that it gets lost”, says Stefan Mecking, summarising the gist and great success of his research. By using suitable catalysts, the researchers were able to prevent this loss and to create polyester effectively. While developing the catalysts, they also worked out the conceptual steps required for adjusting the melting point of the products. “Due to the insights we gained, we should be able to infer how to handle the melting points of other long-chain substrates”, concludes Stefan Mecking, alluding to potential transfer applications of his concept for other renewable resources that are even more readily available than castor oil.