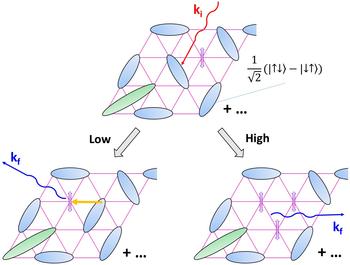 Magnets are prone to order. Their basic constituents, individual magnetic moments, tend to align at low temperatures, thus forming “frozen” magnetically ordered states. A minority of magnets break this trend and reveal peculiar characteristics that can be paralleled to a never-freezing (quantum) liquid. In their recent publication in Physical Review Letters, the researchers from the Chair of Experimental Physics VI/EKM in Augsburg, in collaboration with the Heinz Maier-Leibnitz Zentrum (MLZ) in Munich demonstrate experimentally that the chemistry concept of “valence bonds” can be used to rationalize the behavior of these quantum spin liquids.

Magnets are a tough nut to crack, especially when their fundamental buildings blocks, magnetic moments carried by individual electrons, take advantage of their quantum nature and build complex, entangled states. One of such states is quantum spin liquid characterized by the absence of long-range magnetic order in the same sense as ordinary liquids lack long-range order between the atoms. These atoms keep moving, while those in a crystal take fixed positions prescribed by the crystal structure. This analogy does not go any further, though, because ordinary liquids freeze to form crystals, but quantum spin liquids do not become ordered at low temperatures – they do not freeze. This peculiar behavior was first rationalized in 1973 by the theorist and eventual Nobel prize winner Philip Anderson who proposed a description of quantum spin liquids in terms of chemical, or valence bonds.

In chemistry, valence bonds typically form between two atoms and involve two electrons. These electrons gain energy from being delocalized between those atoms, which in turn requires an opposite arrangement of electron spins, magnetic moments associated with the electrons. It’s at this point where the relation to magnetism becomes apparent. Anderson proposed that quantum spin liquids should be built by pairs of electron spins just like crystals are built by chemical bonds due to electron pairs. His concept of valence-bond states has far-reaching implications in magnetism and even gives valuable insights into the enigmatic behavior of high-temperature superconductors. However, no direct signatures of these magnetic “valence bonds” could be observed in real magnets.

Material is the key

The majority of magnets enter the frozen (magnetically ordered) state at low temperatures. “Finding a quantum spin liquid material is challenging”, says Dr. Yuesheng Li, the postdoctoral researcher at the Chair of Experimental Physics VI/EKM in Augsburg. “We need several ingredients: triangular geometry of the magnetic atoms, robust insulating behavior, and large single crystals to perform experiments on.” A tiny bit of structural disorder proved important too and distinguishes YbMgGaO₄, the system chosen by the team, from several spin-liquid materials studied previously. Disorder is often detrimental and spurs spin freezing, but not in this case. Through careful magnetometry measurements the team showed that the majority of spins are not frozen, thus forming the desired quantum spin liquid state.

Quantum magnetic states have to be probed indirectly. One typically gives the system a slight push and observes excitations that serve as fingerprints of the underlying magnetic state. Among different external stimuli that can be applied, neutrons are most convenient, as their energy and momenta match characteristic scales of quantum spin liquids. The actual measurement was performed using the PANDA spectrometer installed at the research reactor of the Heinz Maier-Leibnitz Zentrum at Garching, Munich. The name PANDA is merely an acronym but ironically reflects the nature of the quite slow measurement that is needed to access low energies with high resolution. “Only a few spectrometers in the world are suitable to study quantum spin liquid, and PANDA at Munich is one of the best”, says Dr. Li who performed this experiment together with the colleagues from MLZ within the TRR80 (Augsburg-Munich) collaborative research unit.

The team confirmed experimentally two processes foreseen by Anderson’s theory of magnetic valence-bond states. The first process is breaking of the valence-bond pair with the formation of two unpaired spins. It happens when incoming neutrons carry enough energy to break the valence bond. Similar effects are known for molecules: chemical bonds break upon laser irradiation, thus making the system more prone to chemical reactions. On the other hand, nothing special happens to molecules at low energies, because chemical bonds remain in place. Magnets are again different, as they can undergo another process, the re-arrangement of valence bonds. This process is arguably the more interesting of the two, as it corresponds to the so-called fractionalized excitations that are impossible in conventional magnets but do occur in quantum spin liquids. “Fractionalizing magnetic excitations has been a long-standing goal in quantum magnetism”, says Prof. Dr. Philipp Gegenwart, the head of Chair of Experimental Physics VI/EKM in Augsburg. “We should now see if these fractionalized excitations are truly generic for all triangular magnets, and whether structural disorder plays any important role”.