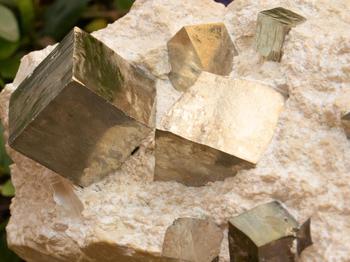 The Carlin-type gold deposits in Nevada, USA, are the origin of five percent of the global production and 75 percent of the US production of gold. In these deposits, gold does not occur in the form of nuggets or veins, but is hidden - together with arsenic - in pyrite, also known as 'fool's gold'. A team of scientists from the Helmholtz Centre Potsdam - German Research Centre for Geosciences GFZ has now shown experimentally, for the first time, that the concentration of gold directly depends on the content of arsenic in the pyrite.

In the Earth's crust, the element gold occurs in concentrations of 2.5 parts per billion (ppb). In order to mine it economically, the gold concentration must be thousands of times higher and it must be found in a focused area close to the surface. In the gold deposits of the Carlin-type, the gold in the rock is not visible to the human eye. Instead, the 'invisible' gold occurs in tiny pyrite rims that grow on older 'fool's gold' grains which originate from sedimentary rocks.

In the laboratory experiments, the researchers around Christof Kusebauch, lead author of the study showed that the element arsenic plays the crucial role in extracting gold from hot solutions probably from magmatic systems, passing through the rock. The higher the concentration of arsenic, the more frequently gold chemically binds with pyrite. The shape of the older pyrite is also important: the larger the surface area of the mineral, the more gold can accumulate.

Similar to the natural ore system, the authors used iron-rich carbonates and sulfur-rich solutions to synthesize their 'fool´s gold' crystals. "Only then we were able to show that the partition coefficient which controls how much gold is incorporated into pyrite depends on the amount of arsenic," says Christof Kusebauch. "The major challenge was to experimentally grow gold and arsenic bearing pyrite crystals that were big enough to analyze."

The new findings may also help to track down new gold deposits. The experiments show that if hot solutions containing gold and arsenic from magmatic sources pass through sedimentary rocks with large amounts of small 'fools gold' grains present, large gold deposits can be formed.