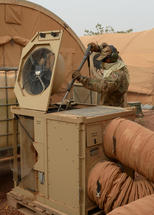 A heating, ventilation and air-conditioning (HVAC) unit gets a cleaning at an Air Force base in Nigeria.

More than a dozen chemical blends could serve as alternative refrigerants that won’t heat the atmosphere as much as today’s refrigerants do, or catch fire, according to a new computational study by the National Institute of Standards and Technology (NIST).

The NIST study identified the 22 “best” nonflammable or marginally flammable blends with lower global warming potential (GWP)—a measure of how much heat a gas will trap if released into the atmosphere—than the current standard refrigerant for vehicle air conditioning (AC), called R-134a (tetrafluoroethane).

Most of the identified blends combine R-134a with one or two other commercial refrigerants.

The new NIST analysis, which was conducted for the U.S. military but also applies to civilian applications such as AC systems for homes and cars, is a follow-up to a 2017 NIST study that found that all single-component, climate-friendly refrigerants were at least marginally flammable. That study suggested blends might offer the optimal solutions.

“The military is insistent about wanting non-flammable blends, but the civilian applications are moving more and more toward at least marginally flammable mixtures,” NIST mechanical engineer and study lead author Ian Bell said.

To help reduce global warming, nearly 200 nations, including the United States, agreed in 2016 to amend the Montreal Protocol to phase down by mid-century the refrigerants used in most AC systems. The partial phasedown, rather than a complete phaseout, recognized the complicated choices that will need to be made to select replacements.

For the new study, NIST researchers selected 13 fluids within a range of pressure, flammability, and GWP values that might produce a blend with the desired characteristics. All fluids were low in toxicity and commercially available. The researchers conducted an extensive evaluation of all possible combinations of two or three of the 13 fluids.

NIST researchers did not find any blends that met all desired constraints—nonflammability, low GWP, high efficiency (cooling per unit of work), and overall cooling capacity similar to that of the R-134a baseline system.

The study identified 14 nonflammable blends that offered a reduction in GWP of, at most, 51 percent compared to R-134a’s GWP of 1300. An additional eight blends that were marginally flammable were identified with GWP reductions of as much as 99 percent. Researchers simulated the performance of these 22 blends in a detailed refrigeration cycle model. The study was performed using computational tools; researchers plan to carry out laboratory experiments to verify the results.

The study revealed several trends. The most promising nonflammable blends have slightly lower efficiency compared to R-134a. These nonflammable blends have a lower GWP limit of 640; this is due to the need for a lot of R-134a in the mixture to suppress the flammability of low-GWP fluids. Other blends containing a significant amount of carbon dioxide were also nonflammable, but these had very low efficiencies compared to R-134a and were not considered viable alternatives.

There is also a general trend of efficiency increasing in tandem with GWP and flammability. This is because lower-GWP fluids tend to be more complex molecules and this complexity can hinder refrigeration performance.

“The ‘good’ blends that we found are very borderline nonflammable,” Bell cautioned. “That doesn’t mean that they won’t still burn given the right environment. We need to be cautious, because this is sort of a dark art. There is a fundamental trade-off: If you really want nonflammability and efficiency, you won’t get both. You will get one or the other.”