Better thermal conductivity by adjusting the arrangement of atoms 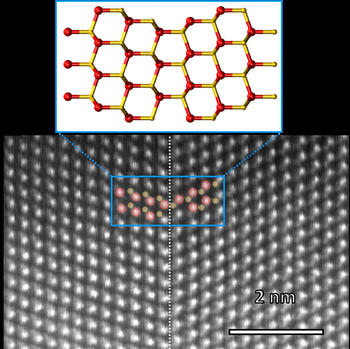 Department of Physics, University of Basel

Two layers of gallium phosphide twisted 60 degrees against each other.

Adjusting the thermal conductivity of materials is one of the challenges nanoscience is currently facing. Together with colleagues from the Netherlands and Spain, researchers from the University of Basel have shown that the atomic vibrations that determine heat generation in nanowires can be controlled through the arrangement of atoms alone.

In the electronics and computer industry, components are becoming ever smaller and more powerful. However, there are problems with the heat generation. It is therefore important to closely examine the heat carrier waves, known as phonons, and to understand their behavior in materials. Research is now even going one step further and is specifically designing materials that can be used to control the propagation of phonons. One aim is to produce materials that release heat very quickly and thus heat up as little as possible. Another is to maintain temperature differences for as long as possible in order to use them for power generation.

Headed by Professor Ilaria Zardo, the group from the University of Basel’s Department of Physics and the Swiss Nanoscience Institute examined materials that have tailored properties for the transmission and dispersion of phonons. As part of an international collaboration led by Zardo, the nanoscientists were able to show for the first time that the arrangement of the atoms alone influences the phonons and thus the thermal conductivity.

To this end, the researchers produced gallium phosphide nanowires in which successive crystal layers are periodically rotated against each other by 60 degrees. This arrangement forms a superstructure in which phonons propagate coherently – thus conducting the heat very effectively.

Previously, such superstructures were produced from periodically arranged layers of different materials. However, the interfaces between different materials are often not perfectly defined, and defects occur that massively reduce the propagation of phonons and thus the thermal conductivity.

In their recent investigations, the researchers proved that such interference effects do not occur if the material of the layers is identical but the arrangement of the atoms differs. And although the layers consist of the same material, the phononic properties only change through the rotation of the layers against each other. Until now it was not clear whether these novel systems behave like conventional superlattices.