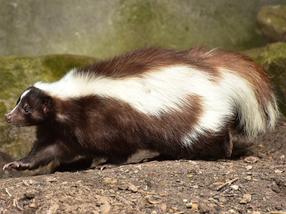 Being sprayed by a skunk is no fun for people or their pets, and the strong, stinky secretions can serve as a nasty reminder of the wildlife encounter for days or weeks. Available "de-skunking" formulas often either don't work well or can irritate the skin and eyes. Now, researchers reporting in ACS' Journal of Natural Products have identified a compound from fungi that safely and effectively neutralizes skunk spray odor.

To find out, the researchers mixed pericosine A with different organosulfur compounds from skunk spray and analyzed the products of the reactions. They discovered that the fungal compound reacted with two types of organosulfur compounds -- thiols and thioesters -- and converted them to stable, odorless products. Then, the team very slightly altered the structure of pericosine A and adjusted other ingredients in the reaction to produce a formula that would be safer and more effective for skin application than the original compound. Finally, the researchers used in vitro eye and skin tests to determine that the fungal compound was non-irritating.