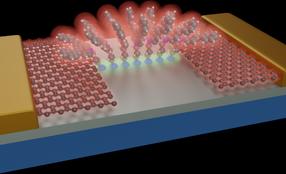 Schematic representation of molecules anchored to a SiO2/Si substrate (grey). Thanks to the controlled structure of the molecules, a stable molecular architecture forms that acts as a bridge for the electrons travelling between the graphene electrodes, These graphene leads are then contacted by conventional metallic (Au) pads (yellow). The molecular structure thus built is reminiscent of the architecture a roman arch.

Electronics built from molecules could open up new possibilities in the miniaturization of circuits in the future. Empa researchers, together with partners from Switzerland, the Netherlands, Israel, and  the UK, succeeded in solving a crucial detail in the realization of such circuit elements: A molecular bridge for electrons that remains mechanically and electronically stable at room temperature.

Molecular electronics, in which circuit elements are composed of molecules, could make it possible in the future to build electronic devices at the nanoscale with novel functions. The components must be precisely constructed and assembled at the atomic level.

Researchers from Empa's lab "Transport at Nanoscale Interfaces", headed by Michel Calame, are working together with partners from the Universities of Basel, and Bern, the Swiss Nanoscience Institute,  Delft University of Technology in the Netherlands, Lancaster University and the University of Warwick in the UK, as well as the Hebrew University in Jerusalem, to integrate molecular bulding blocks with graphene electrodes. (see illustration).

The biggest challenge: provide an efficient electronic transport between the two graphene electrodes. The researchers chose the approach of building a molecular bridge to control the current. The bridge must be mechanically and electronically robust to prevent large fluctuations, inherent in nanoscale devices, And this at room temperature. Furthermore, in order to be used in any application, every feature of the device has to be reproducible over several samples.

The problem: mechanical and electronic stability place different demands on the properties of the bridge.  "A weak coupling between the orbitals provides an interesting electronic connection between the two graphene electrodes and makes the junction properties less sensitive to local electronic fluctuations of the electrodes. However, this strategy leads to mechanically unstable connections," explains Maria El Abbassi, the first author of the paper. If, on the other hand, molecules are used that form a covalent bond with the graphene electrodes, the system can be mechanically more stable - but the transport properties of the bridge are ill defined due to the lack of control of the electrodes geometry and edges and lead to a strong variance in the electronic properties.

A three-part molecule as a solution

The researchers have now succeeded in building reproducible bridge elements that combine both properties: mechanical and electronic stability. The molecules consist of three components: a silane group, a head group and a separating alkane chain. The task of the silane group is to mechanically anchor the molecules to the silicon oxide substrate. It binds via a strong, covalent bond with the substrate. The silanization process also offers another desired advantage: a protective layer is formed on the silicon oxide. The second and key part of the molecule is the head group. Its task is to build a pathway for the electrons between the two graphene electrodes. This occurs in a quantum mechanical process: the pi-orbitals of the adjacent molecules overlap with each other and with those of the two graphene electrodes, creating an extended orbital across the junction and thus acting as a bridge function. The last necessary part is the alkane chain. It electronically isolates the anchor and the head group from each other.

The molecules built up in this way are stacked between the two graphene electrodes and thus form a controllable conductive element.

Three molecules to choose from

For the head group, the researchers investigated three different compounds. The first head group (CH3) acted as a control, leading to devices with a limited electronic connection.  A second group, N-carbozole - proved not to be ideal, as an electronic bridge was built but did not provide sufficient stability to form a well-defined electronic pathway. Increasing the orbital overlap with the third candidate - biphenyl N-carbozole - proved that the strategy could indeed lead to stable junctions with a current several orders of magnitude larger than in the case of the first, control molecule.

The researchers were also able to show that the electronic properties of the bridge construction are stable from temperatures ranging from 20 degrees above absolute zero up to room temperatures.

"This enabled us to demonstrate a simple but effective strategy for incorporating molecule-based functions into nanoelectronic systems in the future," explains Calame.