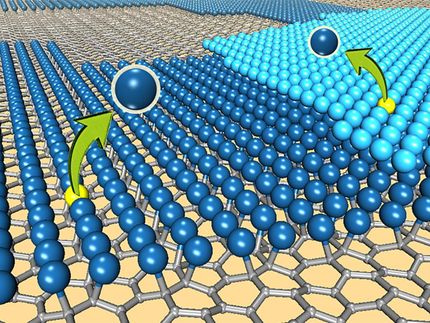 This graphic shows how the graphene layer in gray provides structure and stability to the two atomic layers of platinum above represented in blue.

Films of platinum only two atoms thick supported by graphene could enable fuel cell catalysts with unprecedented catalytic activity and longevity, according to a study published recently by researchers at the Georgia Institute of Technology.

Platinum is one of the most commonly used catalysts for fuel cells because of how effectively it enables the oxidation reduction reaction at the center of the technology. But its high cost has spurred research efforts to find ways to use smaller amounts of it while maintaining the same catalytic activity.

"There's always going to be an initial cost for producing a fuel cell with platinum catalysts, and it's important to keep that cost as low as possible," said Faisal Alamgir, an associate professor in Georgia Tech's School of Materials Science and Engineering. "But the real cost of a fuel cell system is calculated by how long that system lasts, and this is a question of durability.

"Recently there's been a push to use catalytic systems without platinum, but the problem is that there hasn't been a system proposed so far that simultaneously matches the catalytic activity and the durability of platinum," Alamgir said.

The Georgia Tech researchers tried a different strategy. In the study, which was published on September 18 in the journal Advanced Functional Materials and supported by the National Science Foundation, they describe creating several systems that used atomically-thin films of platinum supported by a layer of graphene - effectively maximizing the total surface area of the platinum available for catalytic reactions and using a much smaller amount of the precious metal.

Additionally, the researchers showed that the new platinum films that are at least two atoms thick outperformed nanoparticle platinum in the dissociation energy, which is a measure of the energy cost of dislodging a surface platinum atom. That measurement suggests those films could make potentially longer-lasting catalytic systems.

To prepare the atomically-thin films, the researchers used a process called electrochemical atomic layer deposition to grow platinum monolayers on a layer of graphene, creating samples that had one, two or three atomic layers of atoms. The researchers then tested the samples for dissociation energy and compared the results to the energy of a single atom of platinum on graphene as well as the energy from a common configurations of platinum nanoparticles used in catalysts.

"The fundamental question at the heart of this work was whether it was possible that a combination of metallic and covalent bonding can render the platinum atoms in a platinum-graphene combination more stable than their counterparts in bulk platinum used commonly in catalysts that are supported by metallic bonding," said Seung Soon Jang, an associate professor in the School of Materials Science and Engineering.

The researchers found that the bond between neighboring platinum atoms in the film essentially combines forces with the bond between the film and the graphene layer to provide reinforcement across the system. That was especially true in the platinum film that was two atoms thick.

"Typically metallic films below a certain thickness are not stable because the bonds between them are not directional, and they tend to roll over each other and conglomerate to form a particle," Alamgir said. "But that's not true with graphene, which is stable in a two-dimensional form, even one atom thick, because it has very strong covalent directional bonds between its neighboring atoms. So this new catalytic system could leverage the directional bonding of the graphene to support an atomically-thin film of platinum."

Future research will involve further testing of how the films behave in a catalytic environment. The researchers found in earlier research on graphene-platinum films that the material behaves similarly in catalytic reactions regardless of which side - graphene or platinum - is the exposed active surface.

"In this configuration, the graphene is not acting as a separate entity from the platinum," Alamgir said. "They're working together as one. So we believe that if you're exposing the graphene side, you get the same catalytic activity and you could further protect the platinum, potentially further enhancing durability."