Clarification of a new synthesis mechanism of semiconductor atomic sheet

Toward the realization of next-generation flexible optoelectronic devices 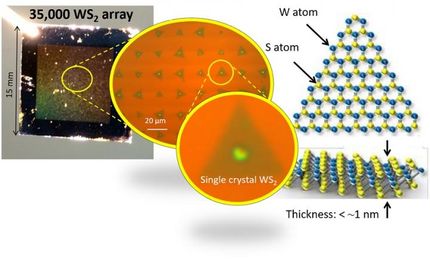 Because it is difficult to directly observe the aspect of the growing process of TMD in a special environment, the initial growth process remained unclear, and it has been desirable to elucidate a detailed mechanism of synthesis to obtain high-quality TMD.

An in-situ observing synthesis method has been developed by our research group to examine the growth aspect of TMD as a real-time optical image in a special high temperature atmosphere of about 800°C in the presence of corrosive gases. In addition, a synthesis substrate, which is a mechanism to control diffusion during the crystal growth of a precursor, has been developed in advance; further, it has been clarified that the growing precursor diffuses a distance about 100 times larger than in conventional semiconductor materials. It was also demonstrated that nucleation occurs due to the involvement of the precursor in a droplet state. Furthermore, by utilizing this method, a large-scale integration of more than 35,000 monolayer single crystal atomic sheets has been achieved on a substrate in a practical scale.

Utilizing the results of the present research, the large-scale integration of atomic-order thick semiconductor atomic sheets can be fabricated and is expected to be put into practical use in the field of next-generation flexible electronics.