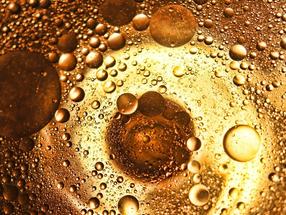 450 million tons of plastic are produced globally each year. PHAs represent a tentative approach to defeating the plague that is plastic. PHA stands for Polyhydroxyalkanoates. Polyhydroxyalkanoates are biopolymers and are referred to as bioplastics due to the similarity of their thermoplastic malleability to plastics derived from fossil resources. “But that’s about it as far as the similarities go,” says Dr. Sebastian L. Riedel who, together with Dr. Stefan Junne, is conducting research into the production of PHAs. And not all bioplastics are the same. “Half of the two million tons of bioplastic currently being produced worldwide is not bio-degradable, while the other half is only partly so and then with considerable difficulty,” Riedel explains. PHAs are a very different beast in this respect. They degrade in water and soil completely as carbon oxide and water and represent no risk to health.

PHAs can be obtained from many sources - including corn, sugar, glycerin or palm oil. Sebastian L. Riedel and Stefan Junne, however, are looking to use a raw material which poses no danger to the environment and which is not, unlike corn, a foodstuff. For them, raw materials such as corn pose their own problems. One of the solutions they decided on in their search for an alternative is waste fat, such as is found in agriculture (animal carcasses), in the restaurant business, or in the further processing of food waste. In other words waste and leftovers. Not for our scientists though; for them, these are valuable raw materials.

But how to turn stinking brown fat into PHAs, something which can resemble the finest white shimmering tissue paper or possess the consistency of washing powder or popcorn?

"This is achieved by bacteria called Ralstonia eutropha or Cupriavidus necator, also known as oxyhydrogen bacteria. We let them sweat away for us,” Riedel jokes. “We place them in a mineral salt solution and feed them with nitrogen, phosphorous, oxygen and carbon. The carbon is added in the form of waste fats. Then we let the bacteria grow. After a certain time, we remove the nitrogen from the bacteria. They react to this deficiency by storing the now excess carbon in the waste fat as an energy reserve in their cells and converting it into PHAs.

If after a certain time we were to start adding nitrogen again, the bacteria would start using the PHAs stored within the cells as a source of energy. Of course, we don’t do this because our aim is to harvest the PHAs produced in the cells. This we do by extracting them using solvents which we can partly recover once the process is complete,” explains Riedel. The two researchers are working on alternative reprocessing methods to make the process both cheaper in the long run as well as more sustainable.

Incidentally, Sebastian L. Riedel began his research into PHAs using palm oil some ten years ago in the USA at the Massachusetts Institute of Technology (MIT). “Palm oil is a wonderfully uncomplicated raw material for producing the desired substance,” Riedel comments. But palm oil plantations spell bad news for the rain forest. When he came to TU Berlin in 2012, Riedel terminated his research using palm oil. “A substitute for plastic, yes, but one which would lead to the destruction of the rain forest – that cannot be the outcome of our research,” says Riedel, justifying his decision. Riedel has been developing his research into PHAs using biogenic waste within the Chair of Bioprocess Engineering since 2017. The Chair is committed to the development of sustainable bioprocesses.