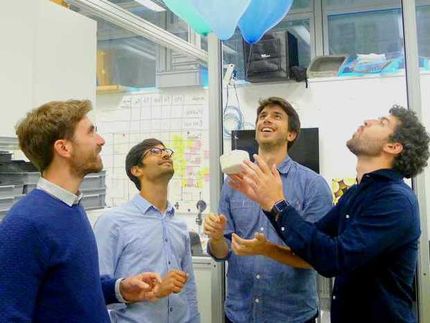 The four young entrepreneurs behind FenX know each other from their time at the Department of Materials at ETH Zurich.

ETH spinoff FenX transforms industrial waste into a porous foam suitable for building insulation. Unlike other sustainable materials used for the purpose, this type of insulation is non-flammable and inexpensive to produce.

No sooner does one of the four young men come up with the idea than they all start blowing up colourful balloons in their lab and tying them to silk threads. They wrap the other end of the thread around a white block that is shaped like a sponge and has the consistency of chalk. “It’s as light as a meringue,” says Etienne Jeoffroy, taking his hands off the block to show that it’s lightweight enough for the balloons to lift it.

The block is in fact a sample of insulation material, and the four scientists are the founders of a start-up named FenX that has developed a process for producing this material from industrial waste. Not only is their product lightweight, it is also non-flammable and produced sustainably.

In a corner of their lab on ETH’s Hönggerberg campus stands a large kitchen blender. “This is how we make the material,” says Jeoffroy, CEO of the start-up. Both the production process itself and the equipment they use are relatively simple. Industrial waste is mixed with water and some additives – the “magic ingredients”, as Jeoffroy calls their recipe, which is the product of years of research. The result is a porous foam that later solidifies to form the meringue-like insulating material.

Anyone who builds a house faces a dilemma when it comes to selecting the right insulation. Should they choose an artificial insulating material, such as polystyrene or mineral wool? These solutions may be cheap and efficient, but they’re not very eco-friendly. Or would it be better to opt for natural alternatives, say wood fibres or flax, which are sustainable but more expensive and often less effective? Something else to consider is that some of today’s common insulation materials are highly flammable.

FenX is working on a solution to this dilemma. The foam panels that the start-up produces are non-flammable and their production is extremely sustainable. For one thing, the production process is energy efficient because, unlike artificial alternatives, there is no need to apply high temperatures to get the foam to solidify. And, given that the insulation panels installed in walls or roofs are reusable, the whole process is underpinned by recycling. Jeoffroy moreover vows that when the material becomes commercially available, it will be at a competitive price. “We can obtain the industrial waste we use as our raw material cheaply or even free of charge,” he explains.

The four materials scientists are still exploring which industrial waste products lend themselves to processing for use as insulation foam. In their first pilot tests they used fly ash, but it should also be possible to process other waste, say by-products from the construction, metal or paper industries. “We’re currently experimenting with around ten different types of industrial waste,” Jeoffroy explains. The idea is that one day, the raw material used for production in a given region will be whichever waste material is readily available locally. This avoids any ecologically and economically pointless transport costs and, in principle, makes production possible anywhere in the world.

Against the backdrop of the Paris Agreement on climate change, the construction industry must undertake to become greener, and this new insulation material should bring about some advantages to that effect. Nevertheless, the ETH spin-off still faces a number of challenges, the greatest being the huge increase in production capacity it needs to be viable in the market. After all, even though FenX’s production method is simple, a kitchen mixer in the ETH lab is not sufficient to supply the material in the quantities that the construction industry demands. “We need a factory-scale production line, and for that we need a partner,” Jeoffroy explains.

Their chances of finding one are looking pretty good. According to Jeoffroy, their foam from ETH Zurich has attracted a lot of interest so far, and the team is already involved in a number of pilot projects. The start-up, which is only a few months old, will also have to attract additional financial support if it wants to grow. So far, the young entrepreneurs have financed their business with funds from the ETH Pioneer Fellowship and from Swiss and European grants. A few days ago, FenX also received 150,000 Swiss francs from the Venture Kick funding initiative. “Our goal is to raise funds to the tune of around 1.5 million Swiss francs by April 2020 and to have our foam panels on the market by 2021,” says Jeoffroy, outlining his ambitious timetable. “By that point, we want to increase our headcount as well. In particular, we’re looking for people with expertise in the construction industry, marketing and sales,” he explains.

The four young entrepreneurs behind FenX – Frenchman Etienne Jeoffroy, Michele Zanini from Ticino, and two Italians, Enrico Scoccimarro and Alessandro Dutto – know each other from their time at the Department of Materials at ETH Zurich. All of them worked on the recipe for the innovative insulation material while still completing their studies or postdocs. They also had the backing of ETH Professor André Studart and of Elena Tervoort, both of whom are now co-founders of the start-up and who continue to provide support in the form of advisors. The fact that the group sets up a company together is down to their unwavering belief in their cause, explains co-founder Zanini: “Bringing this product to market is the only way we can do something to significantly reduce our carbon footprint,” he says.