Atomic images reveal unusually many neighbors for some oxygen atoms 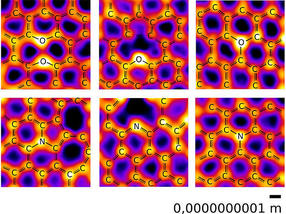 Images of oxygen (upper row) and nitrogen atoms (lower row) in a carbon network, recorded at the microscopy laboratory of the University of Vienna. Among the expected configurations, oxygen is also found with three neighbors as well as in a “pair” configuration with another oxygen.

The identification of new chemical bonds is crucial for the design of new material structures. A team led by Jani Kotakoski at the University of Vienna and Jannik Meyer at the University of Tübingen has found unexpected new configurations of oxygen and nitrogen in graphene. Direct images of the actual atoms and the analysis of the findings were published in the journal Nature Communications.

Life as we know it is based on just a handful of different types of atoms (called elements), among them carbon, nitrogen and oxygen. What allows the complexity of life is the ability of atoms to connect to each other via chemical bonds to form larger structures. Knowing the possible bonding structures allows scientists to both understand building blocks of life and to design completely new structures.

Each type of atom can make a characteristic number of bonds depending on the number of available electrons. Accordingly, chemistry textbooks say that carbon can have up to four bonds, nitrogen up to three, and oxygen only one or two. Now, a team led by Jani Kotakoski at the University of Vienna and Jannik Meyer at the University of Tübingen (previously University of Vienna), has studied the bonding of a large number of nitrogen and oxygen atoms using state-of-the-art scanning transmission electron microscopy.  This was made possible by embedding the atoms into the one-atom-thick carbon material, graphene.

Nitrogen and oxygen atoms were found to bond to their neighbors in a rich variety of configurations. For the most part, the study confirmed the textbook picture, which could now be displayed with direct images of actual atoms: Nitrogen atoms were bound to two or three carbons atoms, while most oxygen atoms had two carbon neighbors. "What really surprised us, however, was the additional presence of structures with oxygen bonded to three carbon neighbors," says Christoph Hofer, the lead-author of the study which was recently published in the journal Nature Communications: "Until now, the exception of oxygen with three bonds was only known in an unusual highly charged state, referred to as oxonium, which is difficult to stabilize," he explains. This is in contrast to the current study, where the structures were remarkably stable allowing their imaging in the microscope. The study also revealed a "paired oxygen" configuration where two oxygen atoms occupy neighboring sites in the graphene lattice but do not create a bond. In addition to providing new insights to the building blocks of life, these new bonding configurations may also lead to the development of new materials.

Overall, the study provides a comprehensive overview of the different bonding configurations for nitrogen and oxygen, illustrated directly through images of the individual atoms. While the textbook concept of bonding for carbon, nitrogen and oxygen was mostly confirmed, these common elements can obviously still yield surprises after decades of study.