Super-strong magnetic supercrystals can assemble themselves 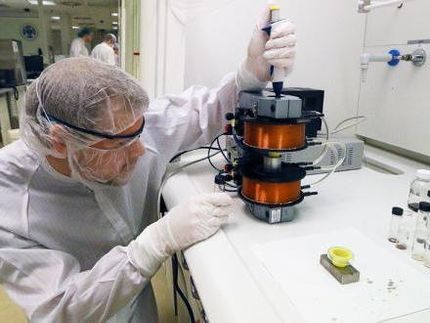 Where old meets new: Verner Håkonsen is working with cutting edge nanotechnology as he studies self-assembling supercrystals. But he's being helped in his research by the old-fashioned copper magnetic coils from the NTNU Physics Department. Their structure allows Håkonsen to create a magnetic field around his nanocubes, which are inside the coils in a crucible. The magnetic field induces the cubes to self-assemble in distinct patterns.

Verner Håkonsen works with cubes so tiny that nearly 5 billion of them could fit on a pinhead. He cooks up the cubes in the Norwegian University of Science and Technology's (NTNU) NanoLab, in a weird-looking glass flask with three necks on the top using a mixture of chemicals and special soap.

And when he exposes these invisible cubes to a magnetic field, they perform a magical feat: they assemble themselves into whatever shape he wants.

"It's like building a house, except you don't have to build it," he says. The magnetic force along with other forces cause "the house to build itself -- all the building blocks assemble themselves perfectly under the right conditions."

Although researchers have previously been able to cause nanoparticles to assemble themselves in different ways, Håkonsen and his colleagues are the first to show how important magnetism can be with respect to the mechanical properties of certain nanoparticle structures.

The researchers called their tiny nanocube creations superstructures or supercrystals because the nanocubes are organized in an ordered pattern, kind of like atoms in a crystal. "Supercrystals are particularly interesting because they show enhanced properties compared with a single nanoparticle or with a bulk material," Håkonsen said.

The big finding is that when magnetic cubes are self-assembled in a supercrystal -- in shapes like lines or rods or helices, for example -- the cohesive energy between the particles in the supercrystal can increase by as much 45 per cent because of the magnetic interactions between the cubes.

"That means the energy holding the whole thing together increases up to 45 per cent," he said.

The strength of the supercrystals in combination with their enhanced magnetic properties will be key to developing future uses, which could span everything from applications for the automotive industry to information technology. Håkonsen's research has just been published in the journal Advanced Functional Materials.

When things get tiny, physics gets weird

One central tenet of nanoparticle research is that the smaller the particles, the stranger their behaviour. That's because as the size shrinks, the surface area of the particle represents a much greater percentage of the overall volume of the structure than in particles that are not nano-sized.

"As a result, the smaller the nanoparticles are, the more unstable they can be," Håkonsen said. This is what is known as the "size effect" in nanoscience, and is one of the fundamental aspects of nanotechnology as things get smaller than 100 nm.

"You can even have particles that spontaneously shift between different crystal structures, because of their small size," he explained. "The particles partly melt."

The size effect also affects other properties in small nanoparticles, like magnetic properties, where the magnetic field from the particle can start to jump around by itself in different directions.

In other words, even though magnetism could make the researchers' self-assembled nanostructures strong, the size effect still played a role. When the supercrystals were super small, the structures were weaker than their larger counterparts.

"What that means is that you have a size effect when it comes to mechanical stability also in supercrystals - a "super-size effect" - but it also suggests that there are size effects for other supercrystal properties," Håkonsen said. "What is also remarkable is that this super-size effect goes beyond the nanoscale, and up towards the microscale."

Rather than posing a problem, however, in this case knowing that the size effect will affect the supercrystals could allow researchers to control -- or tune-- how the structures behave through a variety of different factors.

"This could open up a new field, size-controlled tuning," Håkonsen said. "It could be possible to control the features of supercrystals, not just by how particles themselves are made, but by the shape and size of the supercrystal and the number of particles in it."

Håkonsen's research at the NTNU Nanomechanical Lab relies on nanocubes that he himself manufactures from magnetite, which is why they self-assemble in response to a magnetic field.

Essentially, he makes a molecule that he then heats up in a solvent containing a soap-like substance called a surfactant. The surfactant prevents the nanocubes from getting too big and can also control the shape of the nanoparticle. In this way, Håkonsen and his team can make cubes and spheres, among other shapes.

Håkonsen's collaborators are drawn from across disciplines, including physicists, mechanical and materials scientists and computational experts, and come from the University of Sydney and UCLM (Universidad de Castilla-La Mancha) in addition to NTNU. The researchers chose to use cubes for their study because there has been less research on cubes than spheres, and cubes are also the most likely to provide the strongest structure, he said.

"This is fundamental research. Our motivation has been to investigate how magnetism affects mechanical properties in supercrystals," he said. "It's important because we have all these potential applications, but to realize them, we also need mechanically stable supercrystals."