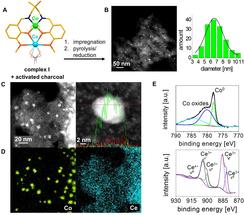 The catalyst used in the new catalytic process can be produced on the basis of common metals and charcoal.

Chemists at the University of Bayreuth have developed a sustainable, inexpensive, and at the same time potent catalytic process: it requires no rare precious metals and enables the targeted production of many fine chemicals, natural products, and medical agents. This opens up a broad spectrum of new possibilities for making industrial processes much more cost-effective for consumers while conserving resources for future generations.

Catalysis is a key technology of the 21st century. That is why its sustainability is all the more important in terms of conserving resources. The catalyst used in this new process can be produced easily and inexpensively on the basis of common metals and commercially available charcoal. At the same time it is recyclable. What's more, this process does not require the use of valuable resources such as the precious metals iridium and palladium for catalysis.

Deoxygenation is critical in the industrial production of numerous fine chemicals, natural products, and medical agents: it involves strategically extracting individual oxygen atoms from organic compounds. The new catalyst is able to accomplish this and only requires inexpensive hydrogen gas, thereby reducing costs considerably. There is also another advantage: the catalyst is able to remove oxygen atoms from complex molecules in such a way that neighbouring functional groups are not altered or destroyed. This highly selective method of deoxygenation could thus be compared to a delicate surgical procedure that protects the surrounding tissue and does not impair its functions. As a result, it is only possible to use the new catalyst at a late stage in the course of a longer synthesis process: i.e. once complex functional units have already been assembled and there are only a few key steps needed to reach the final product.

"Our research is further proof that developing powerful reusable catalysts does not have to be based on expensive and rare precious metals. Significant progress has recently been made in the key areas of sustainability, cost reduction, and technological efficiency. In fact, the new process that has now been published can and should encourage us to continue on this path proactively. Not least with regard to the precise 'fine-tuning' of complex chemical structures, there are certainly still surprising discoveries ahead of us," said Prof. Dr. Rhett Kempe from the University of Bayreuth. Prof. Kempe coordinated the research with his team in Bayreuth, working together closely with researchers at the Leibniz Institute for New Materials in Saarbrücken (INM), the University of Saarbrücken, and the FAU Erlangen-Nürnberg.