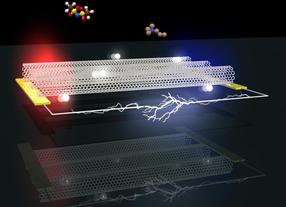 This is an illustration of aligned metallic carbon nanotubes in the team's thermoelectric device. A temperature gradient causes an electrical current to flow.

Scientists from Tokyo Metropolitan University have used aligned "metallic" carbon nanotubes to create a device which converts heat to electrical energy (a thermoelectric device) with a higher power output than pure semiconducting carbon nanotubes (CNTs) in random networks. The new device bypasses the troublesome trade-off in semiconductors between conductivity and electrical voltage, significantly outperforming its counterpart. High power thermoelectric devices may pave the way for more efficient use of waste heat, like wearable electronics.

Thermoelectric devices can directly convert heat to electricity. When we think about the amount of wasted heat in our environment like in air conditioning exhausts, vehicle engines or even body heat, it would be revolutionary if we could somehow scavenge this energy back from our surroundings and put it to good use. This goes some way to powering the thought behind wearable electronics and photonics, devices which could be worn on the skin and powered by body heat. Limited applications are already available in the form of body heat powered lights and smartwatches.

Semiconducting materials are generally considered superior candidates for high-performance thermoelectric devices. However, a team led by Prof. Kazuhiro Yanagi of Tokyo Metropolitan University met an unlikely hero in the form of "metallic" CNTs. Unlike purely semiconducting CNTs, they found that they could simultaneously enhance both the conductivity and Seebeck coefficient of metallic CNTs, breaking the trade-off between these two key quantities. The team went on to show that these unique characteristics arose from the one-dimensional metallic electronic structure of the material. Furthermore, they were able to align the orientation of the metallic CNTs, achieving an output which was nearly five times that of films of randomly oriented pure semiconducting CNTs.

Not only will high-performance thermoelectric elements let us use body heat to power our smartphones, the potential biomedical applications will ensure that they play an important role in everyday applications in the future.