Properties of graphene change due to water and oxygen 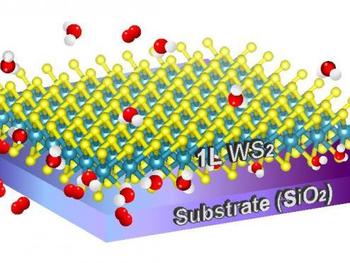 We often find that food becomes rotten when we leave it outside for long and fruits turn brown after they are peeled or cut. Such phenomena can be easily seen in our daily life and they illustrate the oxidation-reduction reaction. The fundamental principle controlling physical properties of two-dimensional materials noted as next generation materials like graphene is found to be redox reactions.

The research team consisted of Professor Sunmin Ryu, Kwanghee Park, and Haneul Kang, affiliated with Department of Chemistry, POSTECH, discovered that the doping of two-dimensional materials with influx of charges from outside in the air is by an electrochemical reaction driven by the redox couples of water and oxygen molecules. Using real-time photoluminescence imaging, they observed the electrochemical redox reaction between tungsten disulfide and oxygen/water in the air. According to their study¸ the redox reaction can control the physical properties of two-dimensional materials which can be applied to bendable imaging element, high-speed transistor, next generation battery, ultralight material and other two-dimensional semiconductor applications.

Two-dimensional materials like graphene and tungsten disulfide are in the form of a single or few layers of atoms in nanometer size. They are thin and easily bended but hard. Because of these properties, they are used in semiconductors, display, solar battery and more and, they are called as a dream material. However, since all atoms exist on the surface of a material, it is limited to the ambient environment such as temperature and humidity which often causes them to modify or transform. Before the research team announced on the result of their study, it has been unknown why such phenomenon happens and has been difficult to commercialize, being unable to control material properties.

The research team used real-time photoluminescence imaging of tungsten disulfide and Raman spectroscopy of graphene. They demonstrated molecular diffusion through the two-dimensional nanoscopic space between two-dimensional materials and hydrophilic substrates. They also discovered that there was enough amount of water to mediate the redox reactions in the space. Furthermore, they proved that charge doping in the acid such as hydrochloric acid is also dictated by dissolved oxygen and hydrogen-ion concentration (pH) in the same way.