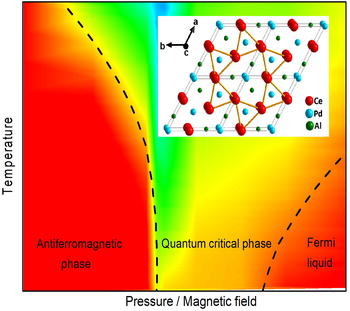 Temperature pressure/magnetic field phase diagram for the CePdAl compound. The colour cod-ing indicates the temperature behaviour of the electrical resistance. The metal behaves as ex-pected wihtin the red marked regions, while deviation from theory becomes from yellow through green towards blue more and more pronounced. The main result is the existence of a quantum critical phase (centre). The atomic structure of the CdPdAl crystal (above) may be re-sponsible for its stabilisation.

A Chinese-German research cooperation involving the University of Augsburg has demonstrated properties in a metal that cannot be explained by the standard theory. The results were obtained on a special metallic compound with unusual magnetic characteristics – scientists call it mag-netic frustration. The cooperation observed a novel, “quantum critical behaviour” in the metal at very low temperatures and at high pressures and strong magnetic fields.

Metals are elements or compounds that conduct electrical current. As the brilliant Russian phys-icist Lev Landau already identified in the 1950s, their properties can be interpreted as if almost independently-movable charge carriers act. Landau called them “quasiparticles” to indicate that they describe a collective state only, in contrast to ordinary electrons.

However, in recent years, materials with properties that are more complex and cannot be de-scribed by Landau’s quasiparticle model have been attracting attention. This also includes the high-temperature superconductors that are interesting for their potential applications. The qua-siparticle picture breaks down when the ground state of a metal – its phase – changes in the event of an external disturbance, such as the application of pressure or a magnetic field. This change can be, for example, that the magnetic moments in the metal (in simplified terms: the elementary magnets) point in completely different directions down to the lowest temperatures (normally they are aligned at low temperatures, i.e. they are in an ordered state). The result is an exotic metallic state, the quantum critical point – named as such because it usually only oc-curs under strictly defined conditions in what is known as the phase diagram. Quantum critical points underly unusual phases such as high-temperature superconductivity.

The Chinese-German team has now demonstrated for the first time with measurements how not only an individual point, but an entire area in the phase diagram can show quantum-critical be-haviour. For this purpose, they have examined a metallic compound made up of the elements cerium, palladium and aluminium (chemical abbreviation: CePdAl) through a detailed study. The Augsburg group led by Prof. Dr. Philipp Gegenwart has investigated the heat capacity of samples intentionally contaminated (doped) with atoms of foreign atoms at low temperatures. The re-searchers led by Prof. Dr. Peijie Sun of the Institute of Physics in Beijing also measured how the electrical resistance of CePdAl changes under pressure and in a magnetic field.

By combining all data, the cooperation was able to prove that CePdAl has a broader critical area instead of a singular critical point. The researchers suspect that this is due to the special ar-rangement of magnetic moments in CePdAl. The cerium atoms, responsible for the magnetism, are arranged in a kind of triangular pattern. The consequence of this pattern is a special phe-nomenon, the “magnetic frustration”.

The cerium electrons behave like small magnets and want to align their magnetic poles with their nearest neighbours at low temperatures. In the CePdAl compound, however, the usual mutual anti-parallel alignment is impossible due to a triangular arrangement. Only two magnets in the triangle can be antiparallel to each other, the third one cannot be antiparallel to both of the others at the same time. “We suspect that this frustration effect stabilises the quantum crit-ical area,” explains Gegenwart.

The success of the study is the result of a cooperation between institutes in Germany and China, supported by the German Research Foundation (Deutsche Forschungsgemeinschaft – DFG) and its Chinese partner organisation. The results are not only important for fundamental research, but they are also relevant for a better understanding of the high temperature superconductivity and other phenomena with potential for various applications.

Magnetic frustration could be the key to understanding critical metallic states that have been observed previously in other materials. “This important conclusion has only become possible thanks to the highly sensitive measurements in Augsburg and Beijing,” said Prof. Dr. Alois Loidl from the University of Augsburg, German spokesperson for the Chinese-German cooperation project. The “Sino-German Cooperation Group” with groups from Hangzhou, Beijing, Frankfurt and Augsburg enables intensive scientific exchange of the participating working groups in China and Germany thus promoting excellent cutting-edge research.