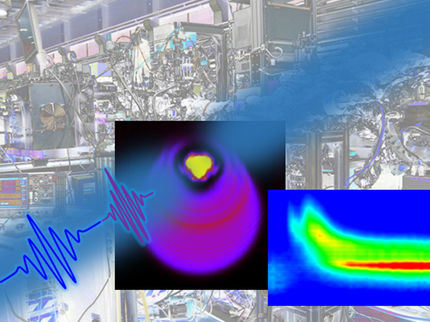 A team headed by Professor Frank Stienkemeier at Freiburg’s Institute of Physics and Dr. Marcel Mudrich, professor at the University of Aarhus in Denmark, has observed the ultrafast reaction of nanodroplets of helium after excitation with extreme ultraviolet radiation (XUV) using a free-electron laser in real time.

Lasers generating high-intensity and ultra-short XUV and X-ray pulses give researchers new options for investigating the fundamental properties of matter in great detail. In many such experiments, material samples in the nanometer range are of particular interest. Some scientists use helium droplets no larger than a few nanometers as a means of transporting and studying embedded molecules and molecular nanostructures. Helium droplets are ideally suited for this purpose because they possess extraordinary properties. At an extremely low temperature of only 0.37 degrees above absolute zero, they move frictionlessly and are thus considered superfluids. Moreover, helium droplets usually are inert to the embedded molecules’ chemical processes and are completely transparent to infrared and visible light.

The team led by Stienkemeier and Mudrich wanted to find out how one of these superfluid droplets itself reacts when hit directly by an intense XUV laser pulse. The researchers used the world's first and only seeded free-electron laser FERMI in Trieste, Italy, which delivers high-intensity XUV pulses at a wavelength set by the team. Supported by model calculations, the researchers identified three elementary reaction steps: A very fast localization of electrons, the population of metastable states, and the formation of a bubble that eventually bursts at the surface of the droplets and ejects a single excited helium atom.

“For the first time, we have managed to directly follow these processes in superfluid helium, which take place in an extremely short time,” says Mudrich. “The results help to understand how nanoparticles interact with energetic radiation and then decay,” Stienkemeier adds. “This is essential information for the work aiming at directly imaging individual nanoparticles," he explains, “as it is being carried out at new intense radiation sources such as the European X-ray laser XFEL in Hamburg.”