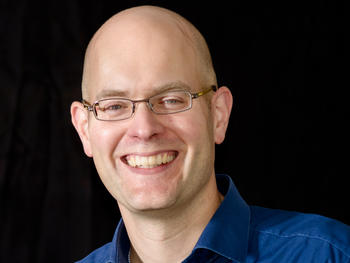 Prof. Frank Glorius from Westfälische Wilhelms-Universität Münster / Germany receives the Otto-Roelen Medal 2020. This prize will be awarded by DECHEMA and the German Catalysis Society in recognition of his developments in the field of chemo- and stereoselective hydrogenation of aromatics. The award ceremony will take place on 12 March 2020 during the 53th Annual Meeting of German Catalysis Scientists in Weimar / Germany.

Metal-N-heterocyclic carbene (NHC) complexes have been successfully used in catalysis since 1995. Aromatic molecules are particularly stable and flat and can be easily integrated into molecules using modern cross-coupling methods. Consequently, in many areas such as pharmacy, molecules are becoming flatter, although three-dimensional ("not flat") molecules have much better prospects of success. This is why pharmaceutical researchers worldwide are now saying "Let's leave flatland" in order to produce better drugs. This is exactly where the Glorius Group's research program comes in: Conversion of flat aromatics into three-dimensional cyclic products.

Frank Glorius, has shifted attention to non-enantioselective arene hydrogenations, since many chemoselectivity problems still have to be solved and since this is an extremely valuable transformation. Illustrative examples are the hydrogenations of fluorinated, silylated and borylated aromatics. All these types of substituents make hydrogenation more difficult and are partly unstable, which can lead to undesired cleavage reactions. The synthesis of fluorinated organic molecules was significantly advanced over the last decades and fluorinated compounds have become an essential part of modern pharmaceuticals and crop protection agents.

Frank Glorius runs an amazingly diverse cutting-edge research program in the field of catalysis. His group is especially known for work in C-H activation, photocatalysis, smart screening and machine learning, the development of lipid analogues and the use of NHCs in multiple areas such as organocatalysis, arene hydrogenation and on metal surfaces. The success of the research program can be seen in his publication record: more than 100 papers published in the Journal of the American Chemical Society and Angewandte Chemie and more than 10 papers in Nature Chemistry, Science and Nature, resulting in an H index of nearly 100.

The Otto Roelen Medal has been awarded by DECHEMA every two years since 1997. It is endowed with 5,000 euros. Founded by the international chemical company Oxea, it honours outstanding scientific achievements in the field of catalysis, which also have a strong industrial relevance.