From Greenhouse Gas to a High-tech Resource 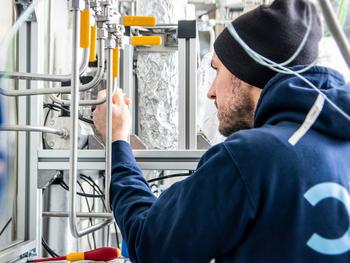 In the NECOC research project, an integrated pilot plant is being built to test a new process for reducing the greenhouse gas CO2 in the atmosphere. The process will produce carbon black - a high-quality, solid carbon.

At Karlsruhe Institute of Technology (KIT), the NECOC research project is aimed at building a unique test facility for active reduction of atmospheric carbon dioxide (CO2). The world’s first container-scale facility of this type is to convert CO2 contained in ambient air into highly pure carbon black powder that can be used as a resource in industry. Project partners are INERATEC GmbH, a spinoff of KIT, and Climeworks, a spinoff of ETH Zurich. The research project, scheduled for a duration of three years, is funded with a total of EUR 1.5 million by the Federal Ministry for Economic Affairs and Energy (BMWi).

With the Paris climate agreement of 2015, the global community has committed itself to limit global warming to below 2°C by the end of the century. To reach this goal, however, global efforts to reduce greenhouse gas emissions will have to be complemented by solutions for removing already emitted CO2 from the atmosphere. “Our project approach consists of removing CO2 from the atmosphere and converting it into carbon black, i.e. highly pure carbon in powder form,” says Professor Thomas Wetzel of the Institute of Thermal Process Engineering (TVT) and Head of the KALLA Karlsruhe Liquid Metal Laboratory of the Institute for Thermal Energy Technology and Safety. “In this way, a hazardous greenhouse gas will be converted into a raw material for high-tech applications. Carbon black can be used in electronics, printing, or construction.”

The test facility to be set up within the NECOC research project will combine the following process steps: By means of an adsorber, CO2 is first captured from ambient air (direct air capture, DAC). Together with renewable hydrogen, it is then converted into methane and water in a microstructured reactor. The methane produced serves as a carbon carrier in the downstream process and is passed into a bubble reactor filled with liquid tin. In the ascending methane bubbles, a pyrolysis reaction takes place, by means of which methane is decomposed into its constituents. These are, on the one hand, hydrogen, that is directly fed back to methanation and, on the other hand, solid carbon in the form of microgranular powder, i.e. carbon black.

All process steps have already been studied and developed up to the laboratory scale by the researchers involved. “We know the individual modules well,” says Dr. Benjamin Dietrich (TVT), project coordinator of NECOC. ”However, they have never been realized together in an integrated facility so far. This is the first time worldwide. Skillful integration of the process modules and correct process conduct will be decisive for the energy efficiency of the process and the quality of the carbon black product.“ The major advantage over previously proposed concepts to reduce atmospheric CO2, such as carbon capture and storage methods (CCS) to store CO2 in deep rock layers, consists in this end product. “Solid carbon is far less difficult to handle than CO2 and can even be used as a resource. So far, carbon black has been produced mainly from fossil petroleum. That is why our process represents a technological approach for a sustainable future in several respects. It combines the direct contribution to solving the climate problem with a process for post-fossil resource supply.”

The test facility will be built on the premises of KIT. It is aimed at demonstrating operation over a longer term. Future extensions of the facility are planned to increase the performance per container and to enable parallel operation of many facilities. The KIT partners of the NECOC research project (NECOC stands for NEgative Carbon diOxide to Carbon) are the Karlsruhe Liquid Metal Laboratory (KALLA), a facility of the Institute for Thermal Energy Technology and Safety (ITES), and the Institute of Thermal Process Engineering (TVT). KIT will not only coordinate the project and operate the facility, it will also contribute pyrolysis technology. NECOC is funded with a total of EUR 1.5 million for a duration of three years by the Federal Ministry for Economic Affairs and Energy.