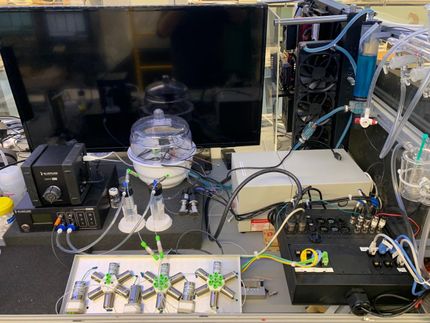 The microsystem for analyzing polymer catalysis and screening, in the laboratory of Ryan Hartman, professor of chemical and biomolecular engineering.

The synthesis of plastic precursors, such as polymers, involves specialized catalysts. However, the traditional batch-based method of finding and screening the right ones for a given result consumes liters of solvent, generates large quantities of chemical waste, and is an expensive, time-consuming process involving multiple trials.

Ryan Hartman, professor of chemical and biomolecular engineering at the NYU Tandon School of Engineering, and his laboratory developed a lab-based "intelligent microsystem" employing machine learning, for modeling chemical reactions that shows promise for eliminating this costly process and minimizing environmental harm.

In their research, published in Nature Machine Intelligence, the collaborators, including doctoral student Benjamin Rizkin, employed a custom-designed, rapidly prototyped microreactor in conjunction with automation and in situ infrared thermography to study exothermic (heat generating) polymerization -- reactions that are notoriously difficult to control when limited experimental kinetic data are available. By pairing efficient microfluidic technology with machine learning algorithms to obtain high-fidelity datasets based on minimal iterations, they were able to reduce chemical waste by two orders of magnitude and catalytic discovery from weeks to hours.

Hartman explained that designing the microfluidic setup required the team to first estimate the thermodynamics of polymerization reactions, in this case involving a class of metallocene catalysts, widely used in industrial-scale polymerization of polyethylene and other thermoplastic polymers.

"We first developed an order-of-magnitude estimation of heat and mass transport," said Hartman. "Knowledge of these quantities enabled us to design a microfluidic device that can screen the activity of catalysts and offer scalable mechanisms mimicking the intrinsic kinetics needed for industrial-scale processes."

Hartman added that such a benchtop system could open the door to a range of other experimental data. "It could provide context for analyzing other properties of interest such as how stream mixing, dispersion, heat transfer, mass transfer, and the reaction kinetics influence polymer characteristics," he explained.

Using a class of zirconocene-based polymer catalysts, the research team paired microfluidics -- proven in research of other exothermic reactions -- with an automated pump and infrared thermography to detect changes in reactivity based on exotherms (compounds that give off heat during their formation) resulting in efficient, high-speed experimentation to map the catalyst's reaction space. Since the process was conducted in a small reactor, they were able to introduce the catalyst dissolved in liquid, eliminating the need for extreme conditions to induce catalysis.

"The fact is, most plastics are made using metallocene catalysts bound to silica particles, creating a heterogenous substrate that polymerizes monomers like propylene and ethylene," said Hartman. "Recent advances in homogenous catalyst of dissolved metallocene allow milder reaction conditions."

Hartman's group previously demonstrated that artificial neural networks (ANN) can be used as a tool for modelling and understanding polymerization pathways. In the new research they applied ANNs to modeling the zirconocene-catalyzed exothermic polymerization. Using MATLAB and LabVIEW systems to control the reactions, interface with external devices, and generate advanced computational algorithms, the researchers generated a series of ANNs to model and optimize catalysis based on experimental results.

"Chemical companies typically use 100-milliliter to 10-liter reactors to screen hundreds of catalysts that in turn could be scaled up to manufacture plastics. Here we are using less than a milliliter, and by scaling down the footprint of lab experiments you scale down the facilities needed, so the whole footprint is reduced. Our work provides a useful tool for both scientific and technoeconomic analysis of complex catalytic polymerizations," said Hartman.

Hartman and his lab's discoveries open doors to new types of research, primarily involving the concept of automated, or "robotic" chemistry, increasing throughput, data fidelity, and the safe handling of highly exothermic polymerizations.