New method for the temperature-dependent generation of terahertz radiation

Use in medicine and material control 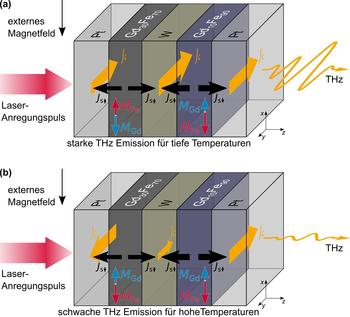 Schematic drawing of the new emitter. At low temperatures (above), the electrons of iron in the two gadolinium-iron layers have an opposite spin. When passing into the outer platinum layers, the electrons of the right layer are therefore deflected to the left, while those of the left layer are deflected to the right (in the middle tungsten layer, the direction of deflection is exactly the opposite). The resulting current pulses are rectified, and the radiation is amplified. At high temperatures (below), on the other hand, opposite current pulses are generated, which almost cancel each other out.

Physicists from the universities of Augsburg and Münster have presented a new type of emitter for generating terahertz radiation, which can be switched on or off by varying the temperature. In the future, it could possibly enable the construction of higher intensity radiation sources. There is great interest in such emitters: terahertz radiation can be used, for example, to make defects in materials visible, to detect weapons under clothing or to detect skin cancer cells.

Terahertz rays are electromagnetic waves, just like radio waves or light. What differentiates them is the frequency with which they oscillate: one hundred times slower than the sunset, but ten thousand times faster than an radio transmitter. They are, if you like, neither fish nor fowl. And it is precisely this characteristic that makes them so difficult to access: they are very difficult to generate using lasers or an antenna.

Terahertz sources are comparatively inefficient and expensive. A few years ago, however, physicists at the Free University of Berlin presented an alternative method of generating terahertz radiation. It allows the construction of much more compact and cost-effective emitters. A team of researchers led by Professor Manfred Albrecht from the University of Augsburg and Professor Rudolf Bratschitsch from the University of Münster have now developed this method further.

The core of the new concept is a so-called spintronic emitter - very similar to the one that was originally designed in Berlin. In its basic version, it consists of two extremely thin metal layers, one of which is magnetic. Metals contain charge carriers, called electrons. They can be imagined as tiny spinning tops that differ in their direction of rotation (their "spin").

With ultrashort laser pulses, some of the electrons in the magnetic layer can be given a push so that they start to migrate. Some of them enter the non-magnetic layer. "This is where the inverse spin Hall effect occurs," explains Mario Fix, who is completing his doctorate in Prof. Albrecht’s research group at the Chair for Experimental Physics IV at the University of Augsburg. “This leads to a deflection of the electrons – the direction in which they are deflected depends on their spin.” The ultra-short current pulse that is therefore created is accompanied by the emission of a terahertz wave.

This mechanism has been known for several years. The physicists from the Universities of Augsburg and Münster have now expanded the metal sandwich. "Our emitter has five layers, each only a few millionths of a millimetre thick," says Mario Fix. "Two of them are magnetic, the other three are not."

The key feature is the materials that the researchers used for the two magnetic layers. Gadolinium-iron alloys of different composition were used here. Among other things, these differ from one another in the direction of the spins that the electrons of the iron have: at high temperatures, the spins of these mobileelectrons point in the same direction in both magnetic layers. At lower temperatures, however, they are oriented in opposite directions.

“This ensures that at low temperatures, the currents created by the inverse spin Hall effect have the same direction,” explains Fix. In other words, they reinforce each other: the intensity of the terahertz radiation emitted increases. If, on the other hand, the temperature is raised above a certain limit, some of the currents change their direction and thereby almost cancel out the effect of the others: the intensity of the radiation decreases considerably. The emitter can thus be controlled by changing the temperature.

In principle, it should be possible to build stronger radiation sources with the concept shown. However, the study is first of all concerned with proving that the process works at all. The scientists now want to increase the radiation intensity further by skilfully selecting the related metals and varying their layer thicknesses.