The potential applications of this miniature terahertz source range from medicine, materials testing and communications technology 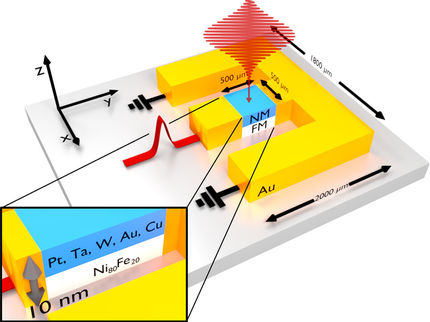 Terahertz radiation lies between microwaves and invisible infrared radiation in the electromagnetic spectrum. It is used, for instance, in materials science to study opaque materials. "Terahertz radiation has no ionizing effect; it does not remove electrons from atoms and therefore, unlike X-rays, poses no risk to health. That’s why it’s used in full-body scanners at airports," explains Professor Georg Woltersdorf, a physicist at MLU. Until now, the radiation could only be generated using relatively complex equipment, which is why it is currently not being very widely used in research. Woltersdorf’s team worked on a new approach together with researchers from Freie Universität Berlin. "The general idea was to miniaturise the process and generate the radiation exactly where it is needed - for example, directly on an electronic chip," says Woltersdorf.

For their experiments, the physicists used a high-power laser which generates light pulses that last around 250 femtoseconds. One femtosecond equals one quadrillionth of a second. These extremely short optical pulses were then directed onto a magnetic nanostructure to excite the electrons inside. "This generates an intense spin current pulse," Woltersdorf explains. Simply put, spin is the intrinsic angular momentum of electrons and forms the basis of magnetism. When the electrons are excited, a so-called spin current flows through the interface layers of the nanostructure. The inverse spin Hall effect converts it into a terahertz current pulse. This produces the desired terahertz radiation on the chip, which can be directly coupled into wire structures and utilised. "In addition, an external magnetic field can adjust the polarity of the current. This has not been possible until now," says Woltersdorf in conclusion.

The potential applications of this miniature terahertz source range from research to high-frequency electronics, medicine, materials testing and communications technology.