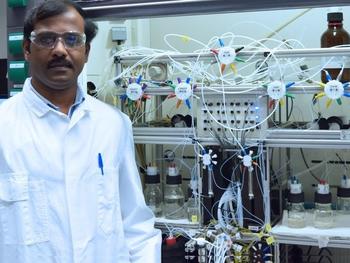 Chemists at the Max Planck Institute of Colloids and Interfaces (Potsdam, Germany) have set a milestone by preparing the two largest carbohydrates ever assembled. Using an Automated Glycan Assembly (AGA) instrument originally developed at the institute they prepared a linear 100-mer and achieved the completion of a 151-mer multiply branched polysaccharide. Preparing defined polysaccharides provides the basis to understand how these ubiquitous biopolymers serve their roles as materials.

Carbohydrates are the most dominant biopolymers on earth. Polysaccharides such as cellulose are the building materials for plants and shells of chitin protect animals. Even though Nature produces 100s of millions of tons of cellulose and chitin each year, access to completely defined polysaccharides has proven extremely difficult.

The team illustrated that polysaccharide chains prepared by the automated AGA method such as 30-mers and 31-mers can in turn be combined to form polysaccharides of unprecedented size and complexity as illustrated by the 31+30+30+30+30 coupling to form a multiply branched 151-mer.

Defined polysaccharides open up insights to all aspects of carbohydrates

Access to complex polysaccharides are the basis for investigations into fundamental structural processes such as carbohydrate folding that is not understood until today. The ability to quickly and reliably prepare such defined molecules gives scientists the tools to study all aspects of carbohydrates that have so far been impossible due to a lack of pure carbohydrates.

“Even two years ago, I would not have dared to dream that it would be possible to prepare 100- and even 150-mer polysaccharides. Systematic improvements in our chemical methods combined with better automated coupling protocols provide us now with extremely interesting tools to better understand carbohydrates” say Peter H. Seeberger who initiated and supervised the study.”