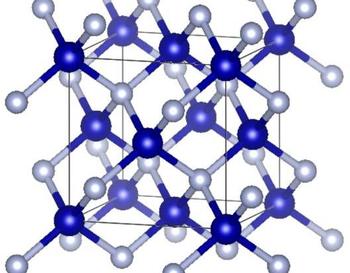 Zinc-blende structure: the anion-cation complex is tetrahedral and the same ions form the face-centered cubic structure.

The problems of high temperature superconductor (HTSC) are important for the physics community and even the whole science area. Ever since its discovery, many researchers have conducted various studies, still lacking of widely accepted solutions. Recently, Prof. Jiangping Hu from Institute of Physics, Chinese of Science, proposed the "gene" theory of high temperature superconductivity based on the electronic properties of existing quasi-two dimensional HTSCs, and used it to search for new families of HTSCs. According to this theory, their group further explored the conditions of expressing of the "gene" in high symmetric three-dimensional structure and predicted cobalt compounds in the zinc-blende structure as new families of HTSC.

This work is titled as Unconventional high temperature superconductivity in cubic zinc-blende transition metal compounds, recently published in SCIENCE CHINA Physics, Mechanics & Astronomy. The researchers used the group theory, electronic band and slave-boson mean-field method to analysis the symmetries of electron motion and to predict the properties of superconductivity. This is a d-wave superconducting state spontaneously breaking time reversal symmetry and maintaining nodes in diagonal directions.

To be specific, the structure considered in this work is the zinc-blende structure as shown in Figure 1. Under this structure, the local symmetries are the same to the global symmetries, which keeps the degeneracy of the t2g orbitals from the three-dimensional representation of Td group. When the electronic configuration is close to d7, those three orbitals are isolated near the Fermi surface, with strong hopping and antiferromagnetic super-exchange in all the directions, triggering the expression of HTSC "gene". The pairing wave under this environment is d+id, breaking time reversal symmetry. This pairing wave vanishes at the bulk diagonal direction in the Brillouin zone, as the direct analogy of quasi-two-dimensional superconductivity in cuprate. By adopting band structure and mean-field calculation, the electron doped zinc-blende cobalt-oxygen-nitrogen compounds may realize such physics.

This result further enriched the prediction of families of HTSCs according to the "gene" theory. If verified by the following experiments, the "gene" theory would be justified and more HTSCs materials would be found.