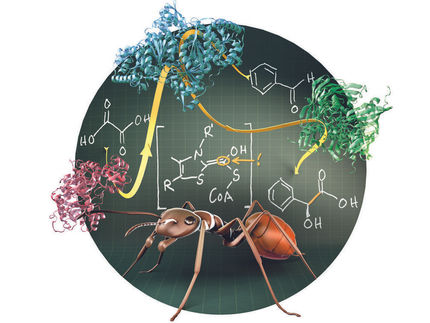 Formic acid, the main constituent of ant venom, plays a key role in the enzymatic synthesis of mandeic acid. A three-enzyme-cascade converts the cheap and safe starting materials oxalic acid and benzaldehyde under mild conditions into mandelic acid, an important building block for the chemical production of cosmetics, flavors, and drugs.

Sometimes potentially useful enzymes are not easy to discover because their biocatalytic capabilities may go beyond their natural and thus known range of action. By recombining a newly discovered enzymatic capability, a research team from the Max Planck Institute for Terrestrial Microbiology led by Tobias Erb created a "green" way to produce mandelic acid.

Chemical synthesis is very powerful, but it comes at a high cost: toxic compounds, environmental hazards, dependence on non-renewable resources. The chemical synthesis for mandelic acid is no exception. It is an important fine chemical, used in cosmetics and as building block for drugs and flavors, but its synthesis relies on the use of cyanide, a powerful poison.

Microbes, in contrast, can employ enzymes and sustainably produce valuable chemicals from very cheap substrates, in a process called fermentation. Mankind has benefited from their expertise for millennia, from making yogurt and brewing beer in ancient times to recombinant production of insulin today. However, most microorganisms found in nature cannot be cultivated in the laboratory or they do not produce the desired compound. Synthetic biology therefore has a key role to play in exploiting the fermentative potential with regard to the implementation of "green" processes in the chemical industry.

Sometimes potentially useful enzymes are not easy to recognize because their enzymatic capacity is beyond their natural function. A research team led by Tobias Erb has now found a method for the green production of mandelic acid. It relies on a newly identified activity of the enzyme oxalyl-CoA decarboxylase (OXC). In nature, this enzyme plays an important role in degrading calcium oxalate, which, if accumulating in the body, can cause health problems such as kidney stones. They found out that the enzyme not only degrades oxalate but can also create a new bond between two carbon atoms.

During the reaction, OXC produces a highly active form of formic acid – the main constituent of ant venom. OXC condenses this activated intermediate with an aldehyde, another very reactive molecule. The scientists improved the enzyme by surgical mutations and combined it with two other enzymes. In doing so, they created a three-step-cascade that converts the cheap and safe starting materials oxalic acid and benzaldehyde into mandelic acid under mild conditions. Furthermore, they were able to synthesize a broad range of mandelic acid derivatives, which can be highly useful in designing new drugs.

The use of biocatalysts in synthetic biology

So far, the method relies on purified enzymes. Introducing the three enzymes into a microbe or synthetic system could eventually enable an environmentally sustainable fermentation process of mandelic acids and its derivatives. In a broader context, the findings underscore the vast catalytic potential of enzymes and demonstrate that well-known enzymes can have novel, very useful activities. In fact, the enzyme functions we know so far are likely to be only the tip of the iceberg. Exploring the full potential of these versatile biocatalysts will make enzymatic synthesis an ever more powerful alternative to chemical synthesis.