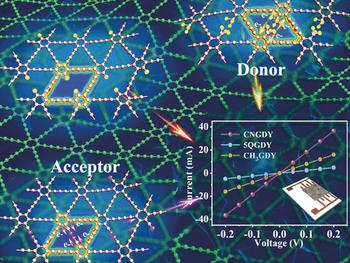 Lithium-ion batteries usually contain graphitic carbons as anode materials. Scientists have investigated the carbonic nanoweb graphdiyne as a novel two-dimensional carbon network for its suitability in battery applications. Graphdiyne is as flat and thin as graphene, which is the one-atomic-layer-thin version of graphite, but it has a higher porosity and adjustable electronic properties. In the journal Angewandte Chemie, researchers describe its simple bottom-up synthesis from tailor-made precursor molecules.

Carbon materials are the most common anode materials in lithium-ion batteries. Their layered structure allows lithium ions to travel in and out of the spaces between layers during battery cycling, they have a highly conductive two-dimensional hexagonal crystal lattice, and they form a stable, porous network for efficient electrolyte penetration. However, the fine-tuning of the structural and electrochemical properties is difficult as these carbon materials are mostly prepared from polymeric carbon matter in a top-down synthesis.

Graphdiyne is a hybrid two-dimensional network made of hexagonal carbon rings bridged by two acetylene units (the “diyne” in the name). Graphdiyne has been suggested as a nanoweb membrane for the separation of isotopes or helium. However, its distinct electronic properties and web-like structure also make graphdiyne suitable for electrochemical applications. Changshui Huang from the Chinese Academy of Sciences, Beijing, and colleagues have investigated the lithium-storage capabilities and electrochemical properties of tailor-made, electronically adjusted graphdiyne derivatives.

Among these functional groups, those exerting electron-withdrawing effects reduced the band gap of graphdiyne and increased its conductivity, the authors reported. The cyano group was especially effective and, when used as an anodic material, the cyano-modified graphdiyne demonstrated excellent lithium-storage capacity and was stable for thousands of cycles, as the authors reported.

In contrast, when graphdiyne was modified with bulky functional groups (methyl groups) that donate electrons to the graphdiyne network, the authors observed a larger layer spacing, which made the material structure unstable so that the anode only survived a few charge and discharge cycles. The authors also compared both modified graphdiyne materials to an “empty” version where only hydrogen occupied the position of the functional groups in the network.

The authors conclude that modified graphdiyne can be prepared by a bottom-up strategy, which is also best suited to build functional two-dimensional carbon material architectures for batteries, capacitors, and other electrocatalytic devices.